In the summer, this British star appeared in the daylight, first with the song "Kids in America" and then the songs "Chequered Love" and "Water On Glass". All the songs came high on the charts and embellish this first solo album Kim Wilde. The girl is not far enough for her father, Marty Wilde, a well-known singer for about twenty years, and she is now singing with his son, Ricky, the brother of the daughter. Kim Wilde is not a pure pop musician, such as, for example. Sheena Easton, so it's not concealing that the music did not shine very deeply. We can say that trying to mark Kim Wilde's way between popular pop and real music. She is therefore able to appeal to Abba-fans as well as Ultravox if the continuation becomes something in the present offer.
Best songs: "Kids in America", "You'll never be so wrong" and "Falling Out" 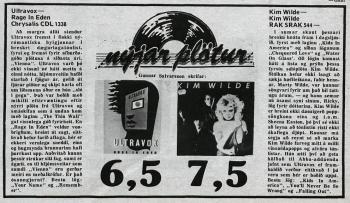