Kim Wilde's and Little Heroes' first albums have wide appeal and offer the promise of an excellent future in both cases.
[...]

Kim Wilde's first album (SRAK 544) shows us that there is a  lot more to her talent than a spunky single called Kids In America. Both the album and the opening track, Water On Glass, are already charting well overseas and it's obvious that Ms Wilde has learnt a lot from her father, Marty Wilde.

The rocky beat Water On Glass melts into the fine lyrics and new wave lines of Our Town before Everything We Know with its lazy style and reggae influence. Young Heroes with its emotive chorus takes an aggressive theme and the tightly strung Kids In America closes the side.

On side two, Chequered Love has a good rock pace while 2-6-5-8-0 takes a lighter tack. You'll Never Be So Wrong is a fine flowing ballad followed by the faster beat of Falling Out. Tuning In Turning On makes an excellent, hypnotic closer.

Ms Wilde wrote most of the songs with another talented member of the family, Ricky. She has a young voice but, if this album is any guide, should do very well with her own brand of smart pop. 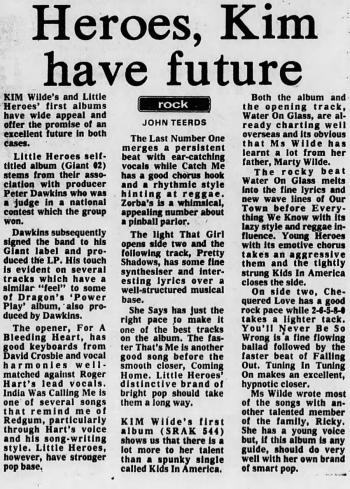