Streetkid Kim stands defiant on the front cover, her gang of boys in black close behind. On the back she's pictured alone, defenceless, vulnerable. Watch the queue form, males of all ages wanting to offer their protection, whether fatherly, brotherly or as potential suitor. Away from the image, father and brother, Marty and Ricky, are closely involved, sharing the composer credits while Ricky produces.

"Kids in America" and "Chequered Love", both appearing here, have taken Kim to the top, from where she can perform a far superior version of "You'll never be so wrong". Hot Chocolate could take it only to no. 52 in the charts; Kim sends shivers down your spine when she sings the chorus. Only other familiar song is closing track "Tuning in tuning on", the undiscovered classic previously hidden on the flipside of her first hit.

Reservations? The reggae treatment of "Everything we know" detracts from the song's beauty. Something about "2-6-5-8-0" doesn't quite add up; if released as a single it would see Kim stereotyped - take a chance, Rak, and let her next one be a ballad. Otherwise, I have no hesitation in declaring this record "Pop album of the year". 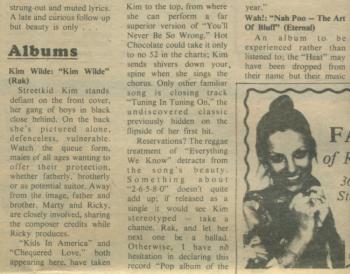