It has become a well oiled family company, consisting of Kim, Rick and Marty. The three of them are responsible for Kims comet-like career. After the enormous hits "Kids in America" and "Chequered love" here's the debut LP. The content is rather shallow, but musically Kim comes across very well. That is mainly thanks to the clarity of producer Rick, who also wrote all of the songs, while father Marty contributed all of the lyrics.
On her debut album Kim plays around with pop songs, flirts with rock and roll and even tries some reggae. All in all it's a fair album.
No more, no less.
(Rupert)
Rating: 3 out of 5 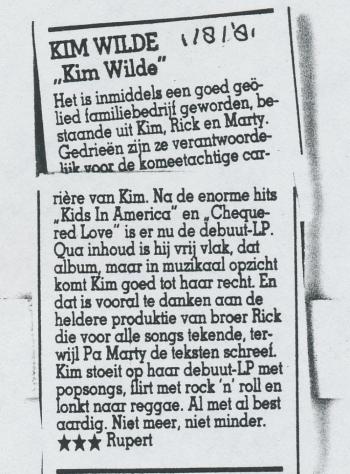