Rockin' dangerous girl - Kim Wilde: "I was born a pop-star!"

When more than half a million songs are sold on the singer's first album, it is possible to talk about good success.
When the same album reaches the top of the English list, the artist can be named EXCELLENT.
Kim Wilde has picked up both merits with her premiere hit 'Kids in America'.

When you look at Kim's background forces, the girl's achievement is no longer so amazing. There are two names that are veterans in the pop field and know something about making hits. The other is Mickey Most, a legendary producer who has produced hits of superstars such as Suzi Quatro, Hot Chocolate, Animals and Herman's Hermits, to name a few. And the other one is Kim's own father Marty Wilde, England's most popular rock runner in the golden age of the 50's. Together, they've been making Kim's first-ever kid in America, whose success makes Kim Wilde one of the most promising talents in the English pop world today.

"I have all my life been in some mills are dealing with pop music," says the thick-lipped Kim stretching supple body with a record company, RAK's leather couch.
"My whole family make their living from pop music, so it is quite natural to suppose that I am in the field ...."

In the late 50s, Kim's father Marty Wilde sang English-language versions of American songs such as Donna, Rubberball, Teenager in Love and Sea of Love. Later in the 1960s, he moved to cabaret, and today, at age 42, is still working hard in nightclubs across England and the rest of the world. Kim's mother was also in show business, a dance group called Vernons Girls. The birth of Kim, however, made her stop dancing and now he is managing an agency called BIG M, focusing on working with her husband and children, Kim and Ricky, who is younger than her.
It was thanks to Ricky that Kim got her voice on the record. Ricky was the one who seemed to have inherited his father's music ear and had his first hit in Australia at the age of ten.
"Ricky would have wanted to be a pop singer, but puberty took away his voice, and nowadays she's focusing on producing and composing. Kids in America is what she has produced even though Mickey Most, who is now my manager, is helping me in the mix," Kim says.
My father and Ricky started composing together a short while ago, and last July they hit my hit song together. Ricky asked me to sing on his demo and suddenly said that we got a hit, my singing. We rushed to the fast-paced Mickey Most recording studio and Mickey, after hearing the song, agreed.
However, as an experienced producer, Mickey Most took matters more peacefully. He waited until January this year, when after the Christmas market, very few new albums are usually released. If 'Kids in America' were stumbled then it would get as much time as possible for radio stations and the chances of a hit would be better. For the television, a powerful video tape was made that would introduce the new sexy singer to the English.
The trick was successful, and in March Kim Wilde was the number one in Melody Maker's TOP 30.
At this point, Kim is recording her first lp, brother Ricky, and lime pieces will be composed by his father and Ricky. Like her next single, Chequered Love.
My album will have a little rock music and it will reflect my own music taste, Kim says. I like black soul singers like Aretha Franklin, Deniece Williams. I also like rock, r & b, Eno, Lou Reed and David Bowie ... And new bands like Heaven 17 and Theatre of Hate.
In the recording studios, Kim has some free time and he's taking advantage of drawing a pile of people running around with him. Kim's Art School of the Year before recording in the Kids in American, and keeps lime and drawing very relaxed and good for relaxation as a resort.
It has already been time for Kim to call Debbie Harry in England; But, on the contrary, Debbie, whose image was created by winter sculpting, 20 years old Kim wants to be herself.

Of course, I take care of my image tani, a couple of false tensioning and crossing articles that may be my whole career. But on the other hand, there is nothing to fear, then want to put anything created when I am. I want to be my own ... 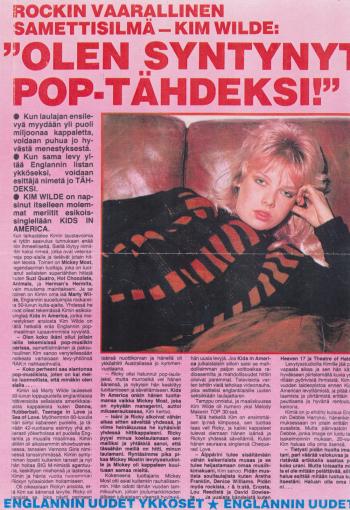