The fact that the single 'Kids in America' became an international hit, isn't any wonder. The tight production, the catchy refrain, but mostly the somewhat hoarse voice of Kim Wilde were guarantees for that. The disc is probably going to end up in pop history as one of the best singles of 1981. The follow-up, 'Chequered love', is going to be a hit also. Kim will stick around, as she will prove with her album 'Kim Wilde', which is released next week.

Kim enters the bar of the Hof van Holland in a sweater. She has been in bed for a while. 'I needed to recharge the batteries, the past few days I have barely slept... I've only been in front of TV cameras.' She chooses the terrace in front of the Hof van Holland to talk a little more about herself. The powerful wind in Hilversum prevents this from happening, however. The bar is too busy and so we end up in a room at the hotel.

Kim likes to spend her time drawing and singer. After school she spent a year at art college. 'I have always wanted to be a singer, but when I left school there wasn't any opportunity for that. And so I decided to focus on my other hobby for a while.'

'My drawings aren't bad, but not good enough to 'show them to the world'. I make them for my own pleasure. I only give away drawings when I have made a portrait of someone for instance.'

Kim's drawings often are made in recording and television studios. 'You have to sit around a wait for a long time. When there's nothing to do, I'd rather take out my sketchbook and draw something. If I had more time, my drawings still would rise about amateur level.  I've got talent. It doesn't take a lot of trouble for me to make a good drawing anyway.'

Musically Kim doesn't want to commit to the rock & roll tyle of 'Chequered love'. 'I want to sing as many different musical styles as I can, like reggae and soul.' Kim names Stevie Wonder, Aretha Franklin and Randy Crawford as her big musical influences, but she adds immediately that she listens to all kinds of music, from Bach to Elvis Costello. 'I don't have a lot of time to listen to music from other people at the moment, but I do still buy records from artists that seem interesting to me.'

With a famous dad like Marty Wilde the studio quickly became like a second home for Kim. She did a lot of session work for friends of her father. 'I sang backing vocals and helped along with sessions. I was often asked because people knew I wanted to become a singer.'

Her brother Ricky - he was a teenybop star in the early Seventies - could also count on her when it came to singing. In fact, it was him who gave Kim her current fame. 'Ricky had written some songs and made a demo out of them. I sang backing vocals on those tracks. In order to get a recording contract, he went to RAK. Mickie Most heard the tracks, was interested and felt that he should re-record them. It meant I had to sing them again. Mickie Most came down one time and was rather impressed with my voice. Later he heard a rough version of 'Kids in America' and asked me whether I wanted to sign a contract with him.'

Kim Wilde doesn't write songs herself, but her brother Ricky (19) and her father Marty do that for her. 'I don't have the inspiration', she says. 'I do get ideas from time to time, and I put them on paper and play them on the piano - Kim does play the piano - but they're not real songs. I'm still young, though. I want to concentrate on my voice for now and my career as a singer. In the few moments I have for myself, I rest or read a book.'

Later on in the bar it becomes clear that she's reading a book about the life of Swedish filmstar Greta Garbo. 'I couldn't live like that', she comments. 'I am a bit lazy, but to sit around the house all day doing nothing like Garbo is nothing for me. You have to do something. Everybody strives for happiness and success... don't they?' 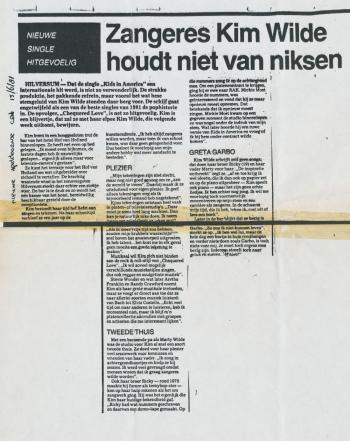