"I can always take up painting," Kim Wilde said last month in England to us. She didn't want to show us her work. Only after repeated questioning she got a portfolio with drawings and paintings out. Then we got to know a different Kim. A Kim Wilde who can do more than sing...

She's enthusiastic about singing. She makes many gestures with it. "This is what I like most." That may be, but she had to put something very important aside for it. Drawing and painting. And if you talk about that with Kim, she turns into someone else altogether. Her eyes gleam, although she says about her drawing talent that it's just "lovely to do. Maybe something for after my career." Although Kim Wilde comes from a very musical family (father Marty was a rocker, mother sang backing vocals and brother Ricky composes and produces), Kim wanted to become an artist. In Hertfordshire (where she still lives) she went to Art college. She calls it "her best time", but she wouldn't trade in her singing career "for the world". "The big advantage of making records is that you make one thing that lands into many houses at once. With a painting that's not possible. It would hang at the wall in one person's house. There's only one. Not that that's the reason for quitting though. I just want to sing very much. It wasn't a choice, it was more like a natural thing. I rolled into it, like I can also roll out of it one day. And then, well, I can always go and paint again."
What she'd like to paint is obvious when you look at her current work. It's all devoted to music.
"I loved guitars", Kim says who painted dozens of them. "My father played the guitar, as did my brother. The guitar was the focus of the household, so to speak. And beside the great sound I think it's a beautiful instrument to look at."
Why haven't there been any expositions of Kim Wilde's work yet?
"Simply because I don't think I'm good enough. You have to devote 24 hours a day to your job and right now my job is being a singer."
So drawing is out of the question?
"No", she says. "I decided to keep painting in my spare time. I have chose rock 'n' roll as the subject. I feel most comfortable with that. It seems like a great idea to do an exposition some day. With only paintings about rock 'n' roll. Everyone is familiar with pictures of me by now anyway..." 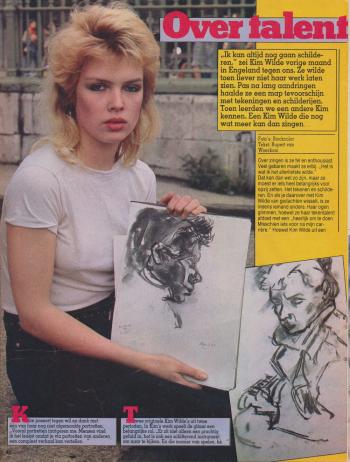 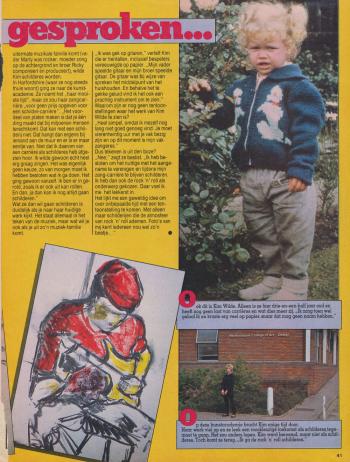