What would you like for your birthday?
Kim Wilde's best birthday present this year (she was 21 on November 18) was to see her fourth hit single, Cambodia, entering the pop charts in England and Europe, but success has its drawbacks. "Even my birthday doesn't give me much ot a break from recording and personal appearances nowadays," explains Kim, currently busy recording her second album for release early next year, in between trips to Germany, Holland and France to promote Cambodia.

Fame is nothing new to the Wilde family. Kim's dad, Marty, was a pop heart-throb in the 1950s, his wife Joyce was one of the popular Vernon Girls group and their son Ricky enjoyed a brief career as a teenybop idol. But Kim has already outshone all their achievements. With her string of Top Ten singles and her best-selling album she has already outsold her dad.

Kim was bom in Chiswick, London, in 1960 but grew up in a thatched cottage in Hertfordshire where she and her parents still live. She tries to find time to cook and look after her pond full of Japanese goldfish "They're called Koi fish and I used to keep them in a bowl, but I became depressed watching them swim round and round so I built them their own little world in a pond - broke my neck carrying the concrete slabs - and now I go to watch them for hours. Mum and Dad think I'm mad".

Her lather's record collection was a big influence on her musical tastes. "I love everything from Frank Sinatra to Elvis Costello and girl singers like Joni Mitchell." Marty has also guided Kim through some of the dangers of the big business world of pop music, using his experience to her benefit. Keeping everything in the family, he also writes songs for Kim along with brother Ricky, who pops up in another guise as Kim's record producer. Her wide range of musical interests has one surprising gap. "Punk kind of passed me by. I had a steady boyfriend then and he meant more to me than any movement I understood why it was happening but 1 didn't feel any need to rebel. I'm not aggressive and I found it a bit frightening."

Although she's grateful for her father's help, Kim points out, "I don't think anybody is impressed by daughters of famous people. They expect you to be spoilt mindless and untalented I hope I'm not like that."

For Kim, success has come hand in hand with the opportunity to travel. Her records sell so well in Australia that she recently made the 27-hour-long flight out to Sydney to meet journalists and appear on Australian television. "It might sound romantic, travelling all over the world, but I was so jet-lagged that I slept a whole day when I arrived and, although I spent 10 days there, I was so busy that I hardly saw anything of Australia."

On her way back to England, Kim stopped off to do more work in South Africa "It upset me that all the cleaners and servants were black people. Whites travelled in cars but blacks always seemed to have to go by bus. I don't think I could ever live there."

A more enjoyable part of the visit was a brief holiday, spending two days in a private game park. "It was fantastic. We saw zebras, giraffes, water buffaloes... but the most frightening thing was meeting an elephant. We climbed out of the Jeep and were standing about 200 yards behind this bull elephant when he turned and spotted us. The guide whispered, "Don't move. It might charge." We stood perfectly still, like idiots, hoping it would go away and eventually it did. I don't know what we'd have done if it had charged."

Until now, Kim has never performed her songs live on stage, although she and her mum used to do backing vocals for Marty's group. 'That was good experience for me. Doing tracks in the studio isn't as strenuous as singing a whole set non-stop on stage. My voice will have to be stronger, so I'm giving up smoking. I'll probably start playing live after the second album comes out next year." I can hardly wait. 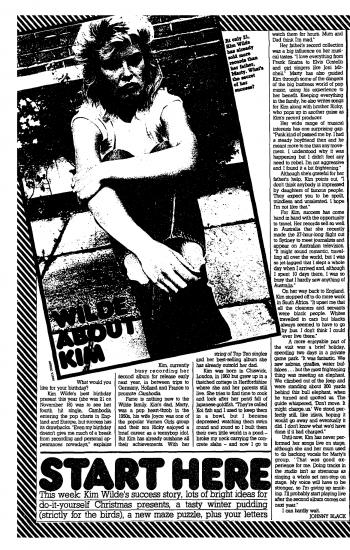