13 countries are conquered by Kim. Mark Ellen hears the facts and fantasies.

KIM WILDE strolls back from the turntable and flings herself into a waiting sofa. The new Elvis Costello album wafts from the speakers, only to be drowned by a vicious bout of coughing. She hasnt been feeling herself lately.
"I've got this bloody-minded attitude" she declares. "Y'know, a sort of I-Can-Do-Anything. which gets me into a bit of trouble sometimes. Recently 1 got it into my head that 1 was unhealthy and decided I'd go out running in the morning. And Dad said: 'Be careful Kim. You'll damage your feet if you don't wear the right shoes and youre bound to catch cold if you don't wrap up.'
"And I thought, 'Rubbish!'. And look at me now; Ive got bronchitis and Ive done my feet in!"
A finger prods gently at the sole of a green suede boot. "Right here," she winces. "Very tender."
Rak Records, her small but incredibly efficient label handle her in the same homely slightly protective manner as her family. She has the mark of someone who's not only their major source of income, but also the precious offspring of a once-famous pop singer.
And - let's face it - having witnessed the careers of both her father (Marty) and her brother (Ricky, early 70s teen-idol) - who now write and produce her material - Kim would hardly be stepping off the music biz pavement if she didnt know how to dodge the traffic.
She's down-to-earth lively and instantly likeable. A far cry from the Kim Wilde you often read about in the press. The Daily Papers tend to go for the uaucy Sex-Bomb Starlet" angle: the rest for a portrait of the artist as A Rather Sensitive Person.
She doesn't care for either much.
"You know the type of thing. 'Kim Wilde'", she recites, reclining exotically on the cushions. "'the wonderful, sensual sex-kitten with her tiger-like mane of blonde hair, turns to me with her luscious poutinglips and says . . . No!', that's naff, that stuff. It doesn't bug me. In fact I couldn't give a monkey's. I've got better things to think about.
The 'intellectual' line gets the same sort of treatment. "There's this word 'Art' you see. There seems to be this tremendous disrespect for Pop Stars but if people put this 'Art' sticker on you. then they dont feel so guilty about liking you.
"Thats the problem: people feel guilty because they enjoy watching Adam Ant or whoever on the TV performing a song. People are always trying to qualify why they like music. They wont admit to themselves that it's just a pure, natural gut reaction. You either like it or you don't. If they just accepted what they felt instead of trying to reason it out" she adds, "life would be far more interesting." 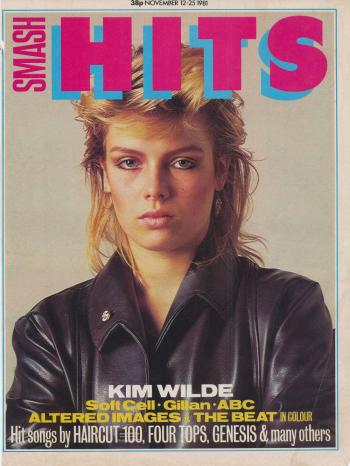 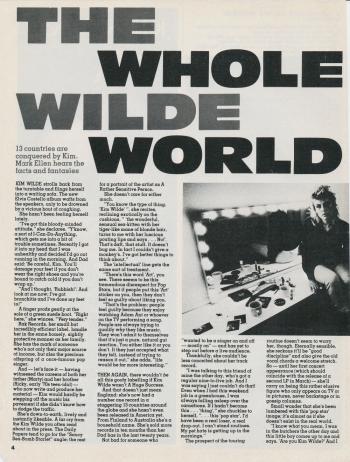 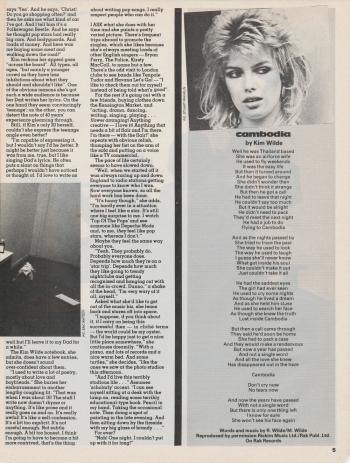