The Wilde bunch! Marty's kids are following in father's footsteps

Watch out for the Wilde Bunch - a family affair with an impeccable pop pedigree. Those of you who find the antics of The Oldest Swinger In Town a little too close for comfort will certainly remember Marty Wilde.

The long-legged, drape-jacketed rocker who had a string of hit singles like Rubber Ball and Donna, has produced another couple of winners. They are Kim and Ricky, his daughter and son. And what's more, their 41-year-old top pop, has a lot to be proud of. Because they are following in his crepe-soled footsteps. All the way up the charts.

Kim's single, Kids in America (RAK), has jumped 20 places this week to perch at no. 41 in the charts - and I predict it will just keep on going up.
Written and produced by Ricky, and sung by Kim, it is their first single. And it's smashing.

Kim, 20, told me: "We're all absolutely over the moon about it. Can't quite believe it, actually. We never expected it to take off like this."
Although Kim has sung "lots of oohs and aahs" on stage as a child with her father, she had no thought of a singing career until she left art college last year.

Ricky, 19, left school and joined his father's band, playing keyboards and guitar for 2½ years. And there was an attempt at the pop business. "When I was about 12, I made a record. My picture was in all the teenybop magazines. It is horrendously embarrassing. Can we talk about something else?"
Kim is an absolute stunner. Her shaggy blonde hair and sensuous face could take over the poster space on many a teenage bedroom wall. Kim and Ricky still live at home with their parents in Hertfordshire.
"I love it at home," said Ricky. "Dad is my best mate and I can tell Mum absolutely anything."
Kim says: "I really appreciate Mum and Dad. Why are we so close? Young parents, I think. The rock business keeps their minds young."

Marty was 20 and Joyce, one of the singing group the Vernons Girls, was 18 when they married. Now the Wilde Bunch have expanded into another generation. Kim and Ricky have an 18-month-old sister Roxanne, named after the Police hit single.
Kim says: "Mum and Dad realised that we were growing up, so decided on another family. And what's more, there's another addition due in April, so we're all thrilled about that."
Marty has every reason to be proud of his brood. Kim and Ricky are bright, polite, amusing and talented. They are working on an album and putting a band together for live shows.
Marty told me: "I openly encouraged Ricky to go into the business. But with Kim it was different. I've seen what some of the girls in rock go through and I suppose I was over-protective. I think I've underrated her. She's sensible and treats it like a business.
"I don't realise just how stunning she looks until I saw the video they made for the single. I'm so used to seeing her across the breakfast table that I never really though about how beautiful she is."
Marty co-produced the single. But will he be making a recording comeback himself? He said: "I would like to make a country rockabilly album, I'm certainly open to offers."
I would love to see Marty back in the charts, too. It would be wild. Just wild. 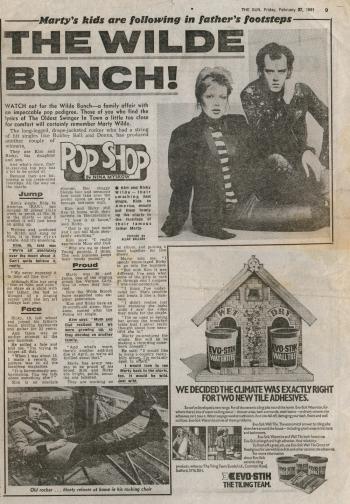