The Wilde one: Rocker dad writes for Kim the Kid

There's a young lady on the phone from Sydney speaking in a sweet British accent about compering Countdown last Sunday night.

'I was a bit nervous, I was also tired... well I've never compered a show before.' The admission of 'a few jitters' and new experience sums it all up really. In a few short months 20-year-old Kim (21 in November) has been catapulted to worldwide success with her hit single, 'Kids in America'. She is in Australia on a promotional visit which coincides with the release of her new single, 'Chequered Love'.

After Australia, it's on to South Africa, then back to Britain to promote her new single release there 'Water On Glass'. 'Kids in America' has swept through Europe and is soon to be released in Japan. Compare that with the Kim Wilde who lives with her parents, brother Ricky and baby sister Roxanne in Hertfordshire and who, up until last year, was studying at the Hertfordshire College of Art and Design.

'I suppose it did happen very quickly, if I think about it I guess it still hasn't caught up with me. Sometimes it catches up with me and I think 'WOW', or sometimes i get very down for no reason. I can't walk down the street in England much anymore without being recognised. I miss not being able to do that in a way, but there are so many advantages to what I am doing. The main one is, I'm doing what I've always wanted to do... sing.'

Kim is luckier than many who get pushed into the limelight at an early age. Her family is completely involved in her career. Her father is Marty Wilde,  veteran British rock'n'roller of 25 years, and he and son Ricky write all of Kim's songs.

'I'm very lucky in that respect, all my business affairs are handled by my family. That's the part that seems to cause most hassles for other artists.'

Kim speaks about her father with a respect not often seen coming from the lips of youth. 'I don't often ask Dad for advice. Usually when I'm in a situation where I need adviceI try and sort it out for myself because often Dad isn't around. He offers me a few wise words now and then and I always listen to him.'

'I want to write some songs in the future, but it's a bit of a closed shop at the moment. I don't like to butt in too much because Ricky and Dad have got such a good working relationship.'

Apart from a couple of local rock bands, school productions in dance and drama and providing back-up vocals with her mother in Marty's rock 'n' roll act, Kim hasn't had any experience appearing on stage as an individual artist. At the tender age of 19, Kim's brother Ricky is also producing all her songs. Her debut, self-titled album is due for release in Australia within the next two weeks. So what's it like working with your family?

'Ricky and I get on very well... most of the time. You know what it's like in a family... you get on most of the time, and you don't get on some of the time', she laughed. Kim will begin work on her follow-up album when she returns to Britain. 'Ricky will definitely be producing whatever comes next.' 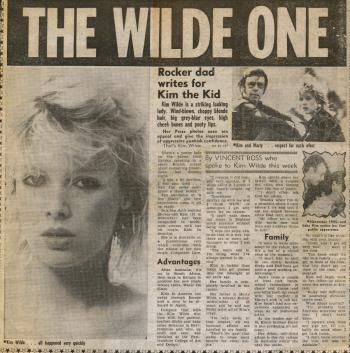