The Wilde sound of Marty's girl

Kim Wilde is a Venus in patched blue jeans, rising on a new tide of young music. As the 20-year-old daughter of Marty Wilde and a former Vernon Girl, her rock 'n' rolling past is peerless.

Her future is even brighter: with the looks of a young Bardot and a sound that's all 80s freshness, how can she fail to shine? It's hard to believe that Kim is too young to recognise the face on her T-shirt as Brigitte Bardot, until she was told. Brother Ricky chose it simply because it looked remarkably like Sis. But it's plain to see that young Kim is too bright to let people package her in any way.

"I didn't fear being packaged as a girl singer. I wouldn't let it happen. Music is very individual now. And my record company just lets me be what I am: what I have to offer is nothing more than ME!"

That is something thousands of fans identify with, unlike the china dolls of yesteryear. Her clothes are Oxfam or jumble sale pickings: "I haven't paid more than 4 pounds for any of them and usually much less."

Her blonde hair is haywire - but looks just great in the raw state. "I cut it myself and use Clairol hair lightener. Some bits it sticks to, others it doesn't."

After the hate philosophy of punk, her views are refreshingly happy-go-lucky. "I used to be frightened by punk, seeing a lot of kids hanging round who seemed to hate everyone and everything. I don't. I LOVE everything! I have a family I love, I don't want to rebel against that. I still live at home with them in Hertfordshire. And though I liked punk music, I just never got into the philosophy that went with it, the unwritten moral code if you like."

Her first record, Kids in America, was written and produced by brother Ricky, 19, and its success - number one in some charts - outdid all her father's efforts: Marty never reachde that high despite 14 hits.

The latest single, Chequered Love, the brother and sister team produced together. Next comes an album; ex-Fine Art student Kim may design the cover herself. A series of TV appearances in France, germany and Sweden has earned her more acclaim.

No way does a chequered career lie ahead. But just where did it all start?

"The first record I heard was in about 1964. It was Cilla Black singing Anyone Who Had a Heart. I remember freaking out over it, at the age of four! I grew up in a very musical atmosphere. If music wasn't being written it was being played. My mum and I used to sing harmonies together, so I had a kind of inbuilt training: it's the best way."

Kim's mother, Joyce, was a Vernon Girl, met Marty on the set of Oh Boy! "He says it was love at first sight, he loved her straightaway which is the way it really ought to happen. She says she just tried to rip his shirt off!"

By the time she was 16, Kim the offspring realised she too was a true Wilde. "It was then I first realised it was worth doing something with music. Mum and dad have always told me I had potential. At 16 I began to have the kind of voice I wanted: it became richer."

Mickie Most, now Kim's manager, spotted the star quality right away. Ricky approached Most, possibly Britain's top producer, with some demo tapes. Kim came to the studio to demonstrate Kids in America without a thought that both the singer AND the song would be snapped up.

"Mickie wanted to do something with me just from seeing the kind of person I was. I like to identify with people, I'm very direct, no nonsense. Just as well -  I do have to suffer some fools around here, don't I Bill?" she jokes with Press agent Bill Harry, an equally direct Liverpudlian who launched the magazine Merseybeat back in the 1960s and has seen a myriad rockers come and go since then.

"No, really, they're fantastic. They give me total freedom", says Kim, running a hand through her tousled hair. Of Ricky, she says: "He's one of these precocious people who just picked up a guitar and played. Now he plays like a dream!"

Kim will put together a backing band when she first goes on the road, probably early next year. Won't that be scary, after a big build-up on TV but no actual concerts?

"I can't wait! I love performing. Working with blokes won't bother me. I get on very well with guys. I make them do all sorts of things I want to do: for example, if they're doing a bass line I don't like or feel isn't right, I'll get them to change it."

I can't see any young men objecting! The image is very macho: square-cut tuxedo and the black suede buckle boots of a principal boy. That is deceptive, says Kim. "I have my feminine moments. I am incurably romantic, especially when it comes down to those awful Doris Day or Frank Sinatra films. I love sitting in an watching them. Otherwise my idea of a good time is a sunny day and having a laugh with friends. I do a bit of yoga sometimes, drink occasionally but don't make a habit of it, smoke only now and again. I'm paranoid bout keeping my health!"

That can be difficult on a hectic schedule. On the European tour, Kim worked at least one 24-hour day. Mobbing by fans has already begun. "I find it really strange when guys and girls come up to me and say: 'I really like you!' I feel grateful to them all. They DON'T say: 'I think you are a sexy thing and I want to take you away and rape you'!"

Marty now stays in the background. His girl will make it on her own merits. "She's got a helluvva future", predicts Mickie Most, the pop pioneer behind the Animals, Donovan, Hot Chocolate,Suzi Quatro and many more. "Kim is an extremely good singer, plus she seems to have some sort of magic on TV. When she first walked in I thought: There is a star!" 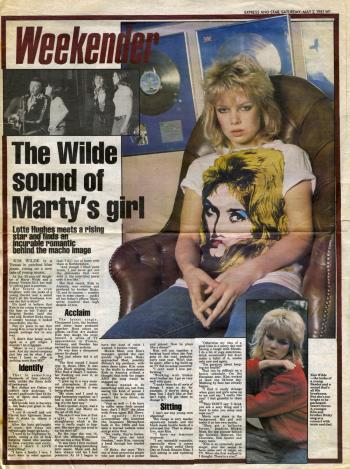