If your dad was one of the great rock 'n' rollers from the Fifties and early Sixties, your mum used to be a Vernons Girl (a kind of Fifties version of the Nolans), and your brother was always writing songs and playing around with keyboards and guitars, then it wouldn't be all that susprising if you turned out to have a gift for music as well.

And that's exactly what happened to Kim Wilde. But although she's been singing since she was four, it still required the kind of lucky break that is legendary in the music business before she was "discovered". It came when Mickie Most happened to hear her filling in the vocals on one of her brother Ricky's tracks last year, and all the pieces of the jigsaw came together. Before long, Mr Most was doing much the same hob for Kim as Larry Parnes did for her dad, when he took plain Reg Smith and turned him into Marty Wilde. Naturally, Kim doesn't like to think about what would have happened if it hadn't been for that bit of luck. "I've wanted to be a singer all my life, and I always had a strange feeling everything would fall into place. But I'm glad it happened this way."

As soon as she left Hertfordshire College of Art and Design to devote all her energy to music, the rise to international stardom followed quickly. Her very first single, 'Kids in America', made it to number two in the charts, her second, 'Chequered love', was just as successful, and she has just released a new album.

Kim admits that she loves being a star - but it's not because of all the trappings of showbiz. It's because she's doing what she really wants to do. "I'm bitten by the singing-and-making-music bug", she admits. In fact, she's very cool and calm about it all. No doubt having her kind of family background has helped her prepare in advance for all the pressures. "Well, I wouldn't say it's been a disadvantage to me", she smiled. When I caught up with her at Rak Records, she'd been spending most of the day talking to a group of people from Japan, where her records have taken off almost as swiftly as in Britain. She seemed completely unconcerned by all the attention she was getting. "It doesn't cramp my style in any way at all!", she said.

It was hard to imagine anything that would. It turns out that, in fact, Kim feels that her remarkable strength of character has a lot to do with being the daughter of famous parents. "I think as I was growing up it was forced on me. I had to be pretty strong to put up with some of the comments I used to get, mostly from people jealous of my so-called privileges. For a while it used to upset me. Then you get to a point where you accept it. It forces you to become very strong-minded about how you feel about yourself, and how you feel about your relationships with your friends. How I am now is just an extension of that."

Kim's strong belief in herself is reflected in everything she does. She listens to the music she likes, whether it's Dusty Springfield or Elvis Costello; she takes people she meets just as she finds them; she wears the clothes she wears, because she likes them, not because they're the last word on chic. Most of them come from jumble sales and secondhand clothes shops in Welwyn Garden City, where she still lives happily with her parents. The day I spoke to her, she was wearing black trousers, a Marilyn Monroe T-shirt, a man's black tuxedoand pink socks. She looked stunning - but then she always does, as anyone who's watched the dramatic, stylish video tapes produced to accompany her singles will agree.

She really likes being a performer, and is confident enough to be able to enjoy thoroughly the buzz she got from being one of the first live performers on Top of the Pops for some 17 years last May. And she looks forward to doing some concerts, though we will probably have to wait until next year for that to happen.

In short, for a lady who is not yet 21, she is very adult indeed, and she definitely knows her own mind. She is reluctant to talk about her love life and, even when pressed, refuses to say if there is anyone special on the scene. So it seems she doesn't intend to be sidetracked by anything that is going to get in the way of her music career.

What, then, does this independent lady think about her sexy image that has caught the attention of the public? "I don't have a false, sex-object kind of image. It's really just an extension of my own personality. I know I come across as very sexy, but at least it's not forces. If it's a natural thing inside you, it's not just sex... I don't deliberately go on stage to do a good job."

Perhaps it's that single quality that makes Kim Wilde a star. And she's likely to stay one because, to steal the words of another female vocalist's song: "She's an independent lady who takes care of herself." And, of course, she can sing a bit, too. 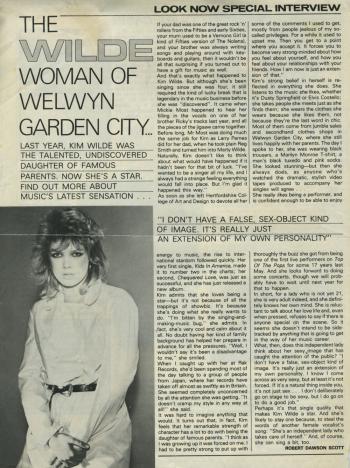