'When I was young, I used to get emotional about the music', Kim told SCENE. 'There was a feel about it that I loved. I hate it now.' With her father's successful recording career, Kim was surrounded by music from a very early age. 'I remember Cilla Black singing 'Anyone Who Had A Heart', she said. 'I was about three or four and I really loved that song. It used to send shivers down my spine. Music has always affected me more than anything.'

As a teenager, Kim went to art school. English art schools have produced such musical legends as The Beatles and The Rolling Stones. But Kim didn't give much indication that she wanted a career in music. 'The closest I got to music was doing a little spot in a revue', she said. 'I sang Leader Of The Pack and I Saw Her Standing There. I didn't want people to know I was a frustrated singer.'

Kim is remarkably frank when she analyses the reasons for her new-found success. At 20, she has the keen perception of a seasoned veteran. 'In England it's getting back to girl singers again', she explained. 'There's Hazel O'Connor, Sheena Easton and the Nolans. It will probably die just as quickly as it came in.' But Kim said she wasn't is her career to fall in a screaming heap when the public taste shifts away from girl singers. 'The good ones will always be around', she said. I mean, look at Dusty Springfiel - she's still going. The people who last are the ones who love what they are doing and who come up with consistant material.'

Finding 'consistant material' is a tricky business as Kim has just found out. Rock and roll history is strewn with one-hit wonders. Now Kim finds herself with the task of repeating the meteoric success of Kids In America with her new single, titled Chequered Love.

'We were very, very worried', she admitted. 'Rickie and Dad had only just started writing together and there was a lot of pressure on them. They virtually had ot write from nine to five. They did it under the worst conditions. But fortunately they are good under pressure.'

Kim said her lifestyle left little time for boyfriends. But she explained that music was the most important thing to her. 'I'm not in a situation where I am trying to hold together a relationship', she said. 'But I do have loads of great male friends. I might have problems in a steady relationship.'

And Kim said that touring wouldn't improve the situation. 'We haven't done any live gigs yet', she said. 'But we should be touring by next year.' 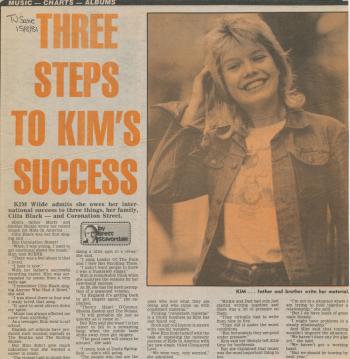