A stubborn flu virus that made Kim Wilde and her brother Rick (musician) and her father (producer) feel ill, has delayed the new single. For two weeks, the family trio was in bed and could not use the booked studio appointment. The single released in England, the album title "Water on Glass", Kim Wilde did not want to release as a single with us: "This was just a stopgap solution for England, where a single holds only a few weeks in the charts."

Four kilos thinner ("I had 40 degrees fever") and a little bit pale, Kim Wilde has now recorded three new songs. But it's not decided which one will be the new single. Kim Wilde: "Of course, I'm under tremendous pressure now, and the third hit is the trickiest, according to experience!" The next album is due to be released at the beginning of December and a first live tour is planned for March 1982. 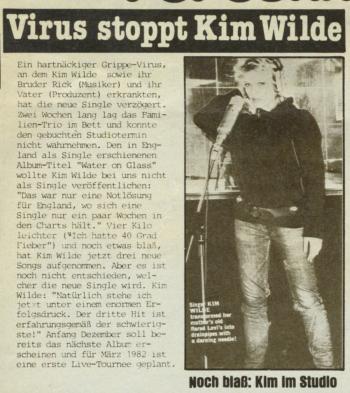