Ways of a Wilde daughter

She's blonde, beautiful and all set to become an even bigger star than her famous dad... vintage rocker Marty Wilde.

Kim Wilde is 20 and she has just been signed up by Mickie Most - the producer who helped Suzi Quatro, Julie Felix, Nancy Sinatra, Lulu and Mary Hopkin to stardom. Her first record, The Kids In America, will be released later this month.

"I've been singing ever since I was four, and my dad has been a great help to me", says Kim. "He even co-wrote The Kids In America with my brother Ricky for me." 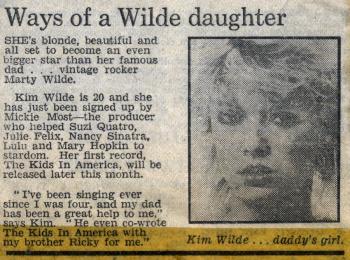