With 'Water on glass', her third single, Kim Wilde continues her European hit race unhindered. Her album is almost going to be certified gold, and concert promotors are contacting her with contracts. Between all the business, our English correspondent managed to tackle her for an interview. With questions we wanted to ask her all along, but we didn't get the chance to ask her so far.

Did you experience an advantage being the daughter of a famous person?
No, if anything it's a handicap. Everyone things you're spoiled rotten and untalented when you have a famous father. It's because in many cases that's true. And when you're the exception to the rule, people tend to ignore that anyway.

How did you start singing?
My father still performs regularly in clubs. I used to do backing vocals for him, together with mu mum. I loved doing that. I ended up in showbusiness without effort. But I have no regrets, looking back.

Did your father get you your first recording contract?
No, he did not have anything to do with it. In fact it all started with my brother, who is now my main composer. He'd written a song (Kids in America), and wanted to start his own career as a singer with it. He recorded a demo on his own costs, and to save costs he asked me to sing backing vocals. With that tape he went to Mickie Most. My voice must have stood out, because a week later I was in the studio.

Wasn't your brother disillusioned?
No, he was very supportive. Ricky feels more like a composer than a singer anyway. For him it was the most important thing to have his song recorded as a single.

Were you influenced by the punk movement?
Not at all, during that period I had a steady boyfriend, and I didn't keep track of the music scene. I started getting interested in music again after punk had ended. The only thing that appeals to me from that movement, is the simplicity. Thanks to punk the glitter has gone from showbusiness, and I like that. I only wear second hand clothes on stage, or old clothes from my dad or my brother.

You also refuse to present yourself in a sexy way.
Yes, precisely. Whether you are sexy or not, it's nothing to do with the craft. Some do it, maybe because they feel insecure. That's also the reason why I never laugh when a photograph is taken. A journalist once wrote that I looked like I hadn't eaten in days. I thought that was funny. But I prefer them to write such things, than that they would write about my legs or something. It's got nothing to do with anything.

Still there are some who call you the Brigitte Bardot of rock.
Yes, that nickname happened by accident. I was in Paris, and bought a beautiful T-shirt there, with a woman's head on it. I wore the T-shirt for a couple of days during TV-performances and the like, and only a few days later I read in the papers that it was Brigitte Bardot's face. I didn't know Bardot well, I have to say. I don't think I ever saw a movie with her. I prefer Greta Garbo and the old Hollywood stars. Anyway, I don't mind. Everyone gets one nickname or another.

How do you see your future as a singer?
I'm very down to earth about it all. I realise it can all be over one day. There's so much competition! But I'm not afraid of the future, not at all. My father has only had a short period of success. But he's still performing, and he's still earning his bread. As long as I can make enough money singing, I'm happy. The hits are nice, but they are not necessary.

Do you have any other interests besides music?
Yes, I've had drawing classes, and I still draw quite regularly. I've also started painting recently. What else? Cooking and reading.

What music do you like?
Abba, Elvis Costello, Elvis Presley, reggae, Brian Eno, Joni Mitchell and classical music. But my favourites are The Police. Two years ago I had a baby sister. I made my parents call her Roxanne, after the hit by the Police. And in the end they did.

There's three of you then?
Four. A few months ago I also had a baby brother, Marty jr. Whenever I'm home I am busy with the baby. I love babies. 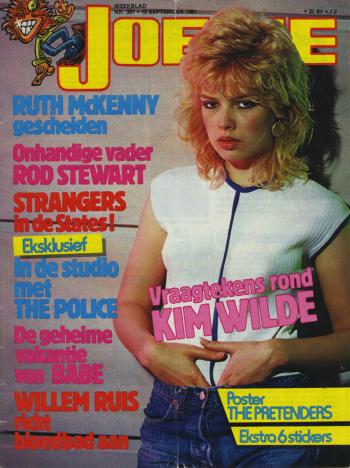 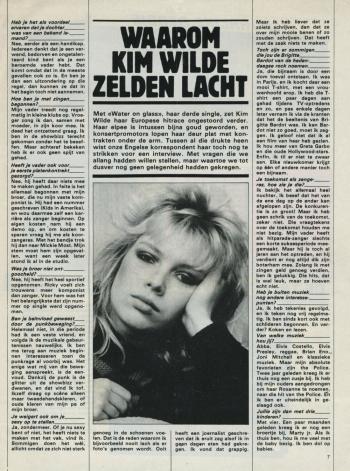