It all started at random. Mickie Most came by the studio where I made a demo recording  - the same day we started doing "Kids In America".

"I have a guy in every port!" says 20-year-old Kim Wilde for Ung Nu, issued with a twinkle in his eye. "I gotta got to live up to my image: wild - wilder - Wilde. An image that the press has bestowed on me."
Kim Wilde was in Copenhagen to receive gold and silver records. "It was pure coincidence that I got started. My brother, Ricky, had written a demo for record label RAK. I had to sing backing. RAK asked us to come into their studio and make a demo recording. And so it went quickly."

"Mickie Most - who have top names like Mud, Suzi Quatro, Racey, Nancy Sinatra on his conscience - happens to coincide came by the studio and heard us. He called on me and asked if I'd like to do something by myself", tells Kim Wilde. "I was stuck somewhere else, but on the day we actually started recording "Kids in America". It's still a bit tumultuous. Everything's gone so fast that I really have not had time to wonder at my luck."

And it's gone hard for the 20-year-old. In only seven months, Kim has become the hottest rock name. She has two gold and one solvplade in Denmark alone. But Kim Wilde has not fallen far from the tree. Her father, Marty Wilde, was a dozen years ago, country rock star with the world's success. Brother Ricky is also something about the music. He had already as a teenager had a hit with the song "I Am An Astronaut".
They were referred not to blame for her breakthrough, but father and brother writes her hits.

You will only appear in videos. Can we expect a tour?
"It is true that I have been referenced in articles that I will only act on the video, but it's not true", says Kim Wilde to UNG NU. "What is true in this context, is that I have not found the right combination of my band. Therefore I'm only on video for now. But just as soon as I find the right musicians, there will be a live tour.

So far, I work with promotion via video-band, which also is exciting to have to do. But live performance is the genuine product and I am pleased much to fashion my audience. I have a one-time experience with it. I was with my father at an Australia-tour - I was only 12 years. But I'll never forget it. We - mother, Ricky and me - were called in on stage and were allowed to sing with Dad during his final number. It was an amazing experience that is burned into my memory. The song was "Take Me Home Country Roads".

"I remember well my first love infatuation. It was a boy named David. I was 13 years - and madly in love. But David had an "engagement" with another girl and I sobbed myself to sleep several consecutive days. My diary was filled with sentimental poems. Later I met David again, and he is now one of my good friends. Now we can laugh about our stormy love. And the feeling and the memory is in the backbone as a warm sense.

Kim leans back on the couch and her eyes become distant. She thinks about David - seven years ago. Or maybe she thinks on Mickie Most seven months ago. When it all started.

It's gone incredibly hard for Kim Wilde. She is still tossed by his comet-like rise into the charts. And now we will hopefully soon see her alive.
It will probably be wild, wilder - Kim Wilde. 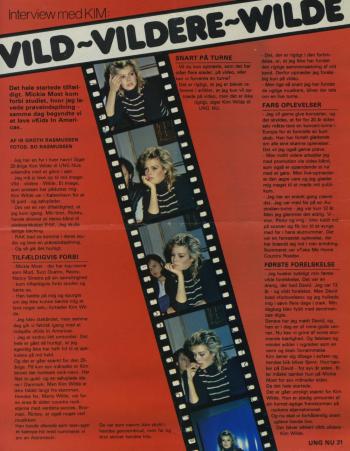 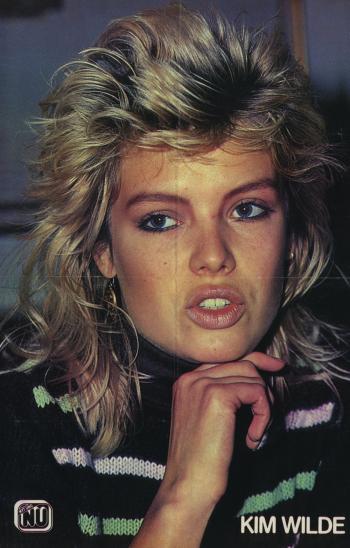