Now that Deborah Harry has rinsed the bleach from her hair and returned to being an ordinary brunette, Kim Wilde has become the idol of bottle blondes.

Kim is the icing on this album, which you could be forgiven for suspecting she didn't have very much to do with. Her father and brother wrote all the material and called the shots in the studio. Add spunky little daughter-sister Kim and KAPOW! - you've got a hit record.

If you liked Kids in America, you'll love the rest of the material on the album. They are all cleverly crafted and it seems they will be able to peel hit singles off it at will. Water on love, Young heroes and You'll never be so wrong - the album is a goldmine. On Rak Records. 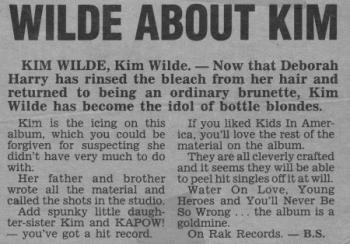