Her father was one of Britain's first rock stars. Now 20-year-old Kim wilde is set to follow in his footsteps.

More than 20 years after Marty Wilde made the hit parade, his daughter is about to release her first record. The song, 'Kids in America', was written by her and will be out in two weeks. The chances are it will be a hit - for the man steering Kim's career is ace producer Mickie Most. The girl singers under his wing have all been successes: Brenda Lee, Nancy Sinatra, Julie Felix, Lulu, Mary Hopkin and Suzy Quatro.

Mickie said: "When Ricky sent me a tape of Kim singing his song I was imperssed with her technique. She is ideal for a contemporary singer. Very hip girls will identify with her and she'll appeal to boys."

Back in 1957 Mickie was partner in the Most Brothers singing act - and supported Marty Wilde on a variety bill. 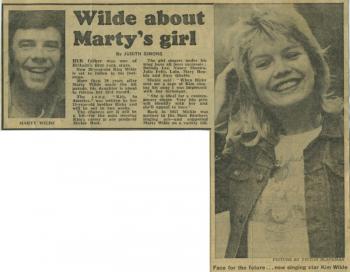