Wilde about the boys? Not right now, says Kim

To many pop fans Kim Wilde seems an untouchable beauty. Her eyes are as blue as some remote southern sea and her frail delicate looks have made her the pop world's latest pin-up. She's been described as the ew Debbie Harry and has had hit records in Britain and abroad.

But under the glossy image, Kim is like any other twenty-year-old with doubts and fears along with dreams and ambitions. Her parents are singer Marty Wilde and his wife Joyce. Like many other youngsters Kim went through a rebellious phase. Now she believes her insecurities go hand in hand with her success.

Kim says: "Sometimes I worry that things are too good to be true and that something horrible must be coming round the corner. I never have my fortune told or get my palm read these days. When I was at art college I was quite interested in that sort of thing. But I'd be scared to go into anything like that now because I'm so unsure of the future."

It was at college that she went through a short and relatively mild phase of teenage rebellion. Kim explains: "I did rebel to an extent, but fortunately my mum and dad are very sensible people. Some kids break out and then find it's not all it's cracked up to be. I realised it wasn't an answer. I had been brought up in a stable and living atmosphere and that brought me through it."

"I didn't do anything very outlandish. I didn't run away from home or anything. But I grew apart from my family. I was staying out all night. I was hardly ever home. My dad didn't stpo me staying out. In fact, that was the great thing because he is a great one for playing on his kids' consciences. He doesn't forbid you to do something, but you know he disapproves."

"When I left art college things changed again. My mum had a baby girl, Roxanne, and I was home ninety per cent of the time and helped to look after her. That got us closer again."

Kim still lives with her parents and is happy to remain there for the moment. Although in the last two moths she has hardly been home because she's been visiting Australia, South Africa and Europe promoting her records. Her singing career leaves little time for other activities and she has definite views about love and marriage.

"When people ask about my sex life I always laugh and say it's non-existent and I ask what their sex life is like because it's always more eventful than mine."

She claims to be happy not to have a boyfriend at the moment and is not worried that her new-found fame will make any future relationships difficult.

"I've spent a lot of time without a boyfriend and there have been only three or four men in my life. The trouble about getting involved with a guy is that he can become a kind of emotional crutch and when it's over you are much weaker and need to rebuild your strength again", says Kim.

Kim is sceptical about marriage, too. "I just don't think I could love somebody for that long and make it work", she says. "My mum and dad have a great marriage that has lasted for many years, but I couldn't ever cope with a steady relationship for years and years, I'm not sure marriage is the natural state that so many people believe it to be. This first struck me years ago when I fell crazily in love with Clint Eastwood. Then suddenly I woke up one day and decided I hated him. Think how terrible it would have been if I'd actually met him and married him."

Kim is busy working on a new single and an album to be released later in the year, and she hopes to go on tour next spring. But there is one trip that Kim is really looking forward to - a package tour with old friends to a winter ski resort.

"It'll be quite a change, but I know I shall love it", she says. 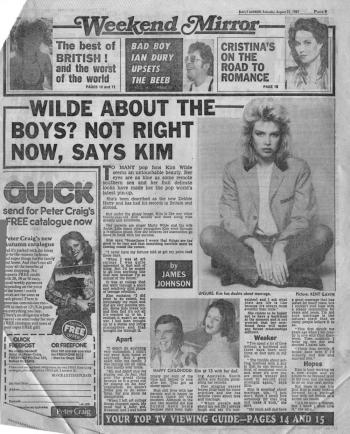