'It's no big deal being a Bardot', says Kim.

She looks good enough to eat... But there's no soft centre to 21-year-old Kim Wilde whose breathtaking beauty has already led to her being hailed as the Brigitte Bardot of pop.
Kim, daughter of veteran rock 'n' roll star Marty Wilde, possesses a hard core of cool self assurance that has helped to overcome her father's fears that the music business is no place for a young girl. Her first record was released in January this year and Kim found herself on top of the charts. Since then she has hardly been out of the Top Pops and her latest single, Water On Glass, and first album, Kim Wilde, have taken her to a new peak of success.
Of her comparison with Bardot, Kim says: "I'm very flattered". "It's no big deal. But it's the kind of thing that is nice to read when you're not feeling too wonderful."
"I don't really see any likeness. It's just my blonde hair - and that's not natural! I put peroxide on it." 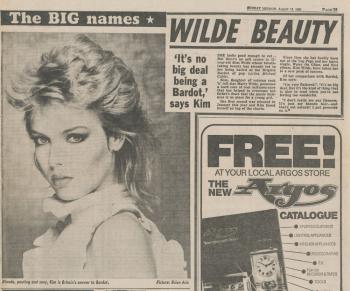