Wilde but not flash

Kim Wilde, Marty Wilde's pop star daughter, is riding high in the charts with Kids in America. This is her style.

CLOTHES: 'My favourite ones come from Oxfam and War On Want shops because they are convenient and cheap. But I also like Johnson's in Kings Road. They are really a men's shop but they do good boots and jackets.'

NIGHTLIFE: 'I hate flashy disco places. The only club I've been visiting regularly is The Moonlight in West Hampstead. It's a showcase sort of place and they feature a number of estalished bands like The Modettes and Soft Boys.'

HOME: 'I live in a thatched house in Hertfordshire, near to a village. I've got a pond in the bac kgarden where I want to collect Japanese longfish as soon as I can get a pump installed.'

FOOD: 'I love Japanese food. Last year I agreed to make sukiyaki as the first course for a dinner party a friend was holding. You're supposed to make it with meat but I forgot to include it - anyway, it still tasted very good.' 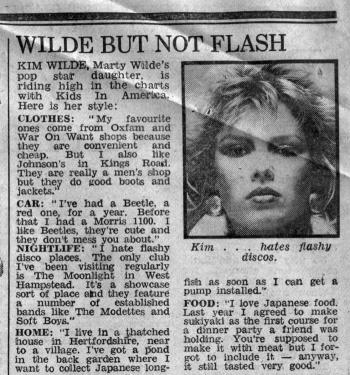