As children, the young Wilde ones were just like any other brother and siter... squabbling and arguing. Today they have formed the youngest most successful partnership of brother and sister since Dusty and Tom Springfield.

Kim Wilde, daughter of rock and roller Marty Wilde, celebrates her second hit in a row with "Chequered love" (RAK) which has moved up to number four in the charts this week. It follows her first ever record, and smash hit, "Kids in America". Both songs were written by Kim's brother, Ricky, and her father.

But it was 19-year-old Ricky alone who produced the successful sound which has transported his 20-year-old sister to stardom in a matter of months.

"We get one really well now", said Kim. But as a small boy she pronounced her brother as "Horrible. He was always cracking jokes, he was the most popular one in the family, always charming to my mother's friends."

And Ricky's opinion of his sister: "She'd snitch on me. Go crying to Mum, complaining about me - and then I'd be the one to get told off."

But it was Ricky who was thought to be he second generation pop star in the family. He recalls: "I'd been playing in my Dad's band for two years - and acted as his roadie! I took some of my songs to be recorded at Mickie Most's studio. I needed someone to sing backing vocals and asked Mickie if I could use my sister Kim. As soon as he heard her voice and saw her, she became the lead singer."

Kim and Ricky still live at the Wilde family home in Hertfordshire, where Marty's wife, former Vernons Girls singer Joyce Baker, acts as business manager for the rest of the family.

For a while, Kim and Joyce also accompanied Marty as backing singers. "But some of the venues weren't suitable for a young girl like Kim", said her father. "I didn't want people mauling her. Now my advice to her is to always handle herself like a big star."

As to Joyce Wilde... "She's been producing in her own right", said Marty. Within the past two years Joyce has given birth to two new Wildes - Roxanne, now two, and Marty Jnr, just two months old.

Kim commented: "I persuaded Mum and Dad to call my baby sister Roxanne, after the Police hit record."

Brother Ricky added: "As a record producer I'm waiting for her to grow up - then Roxanne will be my next project!" 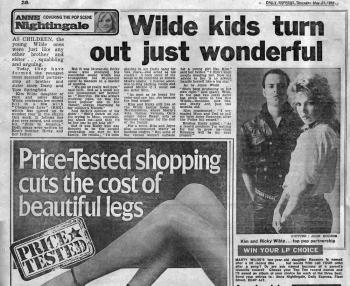