When Marty Wilde shot to fame in 1959 (look it up in a history book), the only questions anybody ever asked pop singers were about their height, their favourite kind of girl and the colour of their eyes.
I hadn't planned on asking his daughter, Kim Wilde, the colour of her eyes but I found out anyway. Kim was relaxing in the plus hleather swivel chair usually reserved for Mickie Most, the Rak Records "starmaker" who brought you Suzi Quatro. Her press officer popped his head into Rak's spacious, glass-walled office and yelled, "What colour are your eyes, love?"
Kim picked up her latest single, stared at the picture sleeve and shouted back, "Blue". Then, under her breath, "Actually they're yucky grey with a black line around them, I just call it blue."

Kim has very few illusions about herself.
"I don't think anybody is impressed by daughters of famous people. They expect you to be spoilt, mindless and untalented, and sometimes they're right. I hope I'm not like that."
Luckily, she's already established that Kim Wilde has a character of her own, capable of existing independently of her multi-talented family. Her taste in men's clothes ransacked from Oxfam shops, her outspoken opinions and a range of interests beyond music that runs from Japanese Koi fish to cookery and impressionist painting, all testify to her being more than jut another member of the all-singing, all-dancing Wilde bunch.
The goldmine of family talent can't be ignored though. Marty had a string of hits in the fifties, performs to this day and writes songs. Her mum was one of the Vernon Girls singing group and young brother Ricky had a failed teenybop career, only to bounce back as writer and producer of songs for Kim. Visions of a dreaded Osmonds-style home life, harmonising barber shop quartets around a blazing log fire in their Hertfordshire thatched cottage are quickly dispelled.
"I just couldn't do that", she laughs. "It would be so contrived. People in the old days used to get down with the piano and sing their hearts out, but now you really can't. It was more natural then. Singing should be more spontaneous, but how often do you see passers-by in the street singing? You're lucky to get a smile out of them, let alone a song.
"There's always music in the house though. I tend to listen to albums. I play 'Another Green World' by Brian Eno a lot, and Joni Mitchell. I try to keep my taste wide, and it's always changing, but I'll eternally respect the two Elvises, Aretha Franklin, Chuck Berry. There are some people that anybody with a grain of sense will always admire."

During a year's foundation course in Arts at St Albans, Kim became aware of how the establishment favours the male of the species.
"You're painfully aware of the lack of women painters. Colleges have mainly male tutors who give the blokes the majority of their time, so they get the best places in art schools. It's partly that if a woman wants to have kids, she can't follow a career as well. I was into colour and human beings. I like to capture a moment, like the Impressionists did, but they were prissy about it. I wanted to do it fast. It's the same with the album, I don't want to hang around doing it."
"Kids in America" was reputedly recorded in one take, and brother Ricky apparently wrote the songs for the album inside three weeks. He's fast as well.
"Too true. Crashed my Beetle the other week. He's too fast, and not just with cars. With everything. On the physical side, rather than on the brain-side. He was always better than Dad at sports, never tried hard at school, while I was always slogging away. I shouldn't have worried about him. He's proved himself admirably now.
"He just wrote a beautiful, almost classical, piece of music for the album, and I said, 'I'd love to write words to that.' I wish I hadn't said it, because he and Dad turned round together and said, 'Do it'. I've always been scare to write songs.
Sometimes if you want to do something a lot, it scares you. I want to be at least as good as my favourite artist. In the end, I'm quite pleased with it, it has got me over that barrier of fear and I can see that writing could be a pleasure."
As well as topping the charts here, "Kids in America" sold well throughout Europe - and in Germany they call her "The Bardot of Rock". She pulls open her black jacket and shows off a handsome t-shirt emblazoned with the distorted image of a female face. "That's what started it", she reveals.
"When I bought this t-shirt, I didn't realise it was Bardot's face. When the Germans saw it, they thought it was my face I'm flattered really, and that's why those comparisons started.
"I understand why they do that. When you're new to this business people try to find something to compare you with, to pigeon-hole you. Eventually they'll realise I'm nothing like Bardot, but if they think I have that kind of appeal, I have no objections."
Although Kim isn't planning any live shows until at least next year, she has the dubious distinction of being the first artist in seventeen years to go live on Top Of The Pops. She opened the recent experimental 'live' edition, singing live to backing tracks.
"That show needed a kick up the arse, didn't it? Putting it out live made a real difference. Best thing that happened to it in years. I prefer the European shows, where they seem better organised and you can do little bits of comedy routines.
"Mum and I used to play live gigs with Dad. We did the backing vocals, shoo-wop shoo-waddies, until Mum fell pregnant again. We had a lot of fun and I got some stage experience. Dad learned a lot from the mistakes he made, and he wants to be sure I don't make the same ones. I learn a lot just watching how he deals with people. I learn to compromise ,and not get too big headed."

Tucked away niside the streetwise, aggressive kid who struts on TOTP are layers of other characters. There's a sensible business mind ticking away constantly. There's a loner who adores the '30s film idol Greta Garbo. There's also a future mum and a great cook.
"I had the band round to dinner last week. I love cooking. I mean, if you invite eight people round to dinner and you want them to have a lovely evening, it's very stimulating planning the food, buying it, cooking it. I'm a nervous wreck by the end, but it keeps the band sweet."
How domestic. How sensible. How... normal.
"I suppose I am quite conventional, but what do you call normal? If yo umean that most kids don't want to have people round for dinner parties, then that makes me abnormal. Right?
"I'm very happy at home, but life is getting increasingly hectic, with so much to be done in London. I haven't seriously thought about moving out though. Having a couple of hits has changed what happens in my life ,but it hasn't changed me yet. I have a road to follow now, and a career can bring its own problems ,but at least I'm doing what I want to do."
Despite Mickie Most's belief that Kim's appeal lies partly in the "less polished, slightly do-it-yourself" sound of her records, they shine like bathroom-mirror tiles compared to the kitchen sink jobs we've taken as the norm since 1976. The difference lies in the fact that Ricky Wilde has the intuition to apply polish to the sharp edges in Kim's energetic offerings. Punk it ain't.
"Punk kind of bassed me by. I had a steady boyfriend then, and he meant more to me than any movement. A steady relationship like that can shield you from reality sometimes. I understood why it was happening, but I didn't feel the need to rebel. I'm not aggressive, and I have found it a bit frightening and a bit hypocritical.
Punk shock waves, she claims, never really reached her all-girl school. Kim hung around with three sixth-formers who had the "same scatty juvenile mentality", and whose interests in Art, Drama and Dance set them apart from the rest.
"The school was full of straight-laced types having their mothers' meetings about the price of wool, discussing their fiancés and doing their knitting. We'd do things to outrage them, acting up the naughty schoolgirl stereotype just to see their reactions. We weren't even into boys at all, just creating havoc in their cosy little environment. That was the first time I found some real friends. I had a great time.
"By the time I went to college I was a bit of an outsider. The attitude at college was just to pack as much craziness into the year as they could because 'after all, we are art students'. A lot of kids didn't consciously realise they were doing that, but I saw it and I knew it had to end. Clever little thing, I was. Anybody with half a brain knows it is just a year."
Kim is aware enough to realise that life isn't an affair of heroes and villains, black and white. She doesn't even let Maggie Thatcher get her down.
"If it wasn't her it would be somebody else. She's just in the hot seat at a particularly bad time. I heard about this guy who's shaved his head, dressed up as a peasant from the middle ages and he's walking to London from the north of England to protest to Maggie Thatcher that things are no better now than they were under the Romans. I understand exactly what he means.
"You get so depressed that a futile gesture like that seems sensble. A futile gesture for a futile society. Maybe futile is the wrong word. I haven't given up hope for this country, but sometimes I think people are so blind. They're so greedy. They act as if this is the worst place in the world, but look at the alternatives. We should have a more positive attitude, we could be starving. I couldn't live anywhere but in England. I'm so proud to be British, very patriotic... God knows why."
Those last three words rescue Kim fro mthe verges of creeping nationalism, and she admits she really doesn't hold any profound political views. On the whole, she prefers goldfish to politicians.
"I used to keep them in a bowl until I got depressed watching them swim round and round in circles, so I decided to make them a little world in a pond - broke my neck carrying concrete slabs around with my friends - but I was very proud of it when it was finished. I used to go out and watch them swimming round.
"In a way, it's my little world, my escape. Everyone thinks I'm mad watching them. My perfect world would have a river flowing through it, beautiful trees, lots of greenery, fish ponds and everyone wearing white, drinking champagne on ice. But just for one day.
"I really like normal life. If you can be happy with what you do, then that's the most idyllic way to be alive."
How sensible. How normal. Seriously! 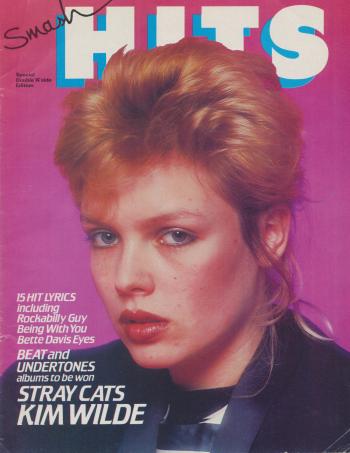 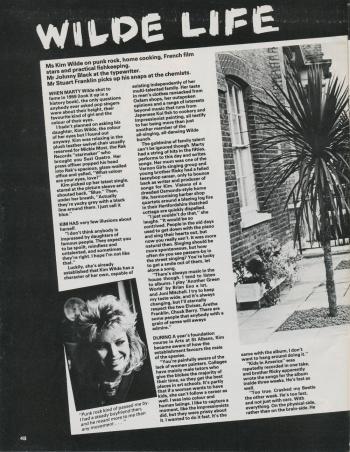 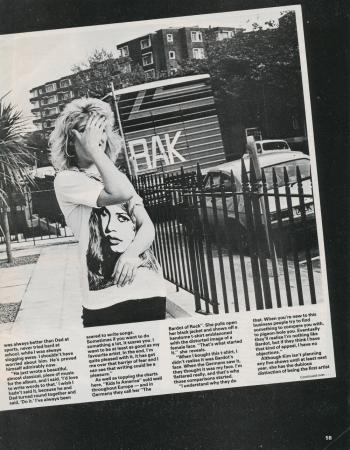