Lovely Kim Wilde vividly remembers the first time she felt like a real pop star. "It was when my dad walked into our lounge at home and told me that 'Kids in America' had just sold 81,000 copies in one day", she says. "It was an incredible feeling and I could hardly believe my success 'cos I'd had so much disappointment when the song was first released. It'd started off selling well in most parts of the country and even made a small dent in the charts. However, the record authorities decided to pull it out of the top 75 singles because it hadn't sold so well in Scotland and Wales. I felt dreadful when they told me - but I soon cheered up when the sales suddenly rocketed the second time around!"

"We wanted to open a bottle of champagne when Dad told me - but we didn't have any so we had to settle for a cup of tea instead! At dinner that evening no-one said anything to each other - we just sat there with massive grins on our faces!"

Kim certainly has plenty to smile about these days 'cos her ambition to be a pop singer has finally come true.

"I come from a very musical family", says Kim. "And at the age of about five I decided that I was going to become a singer. My dad, Marty, was a really popular artiste in the '50's so he's given me tons of help and encouragement. In fact, he and my brother, Ricky, composed 'Kids in America' for me in about half an hour."

"I almost grew up in a recording studio 'cos I was forever being taken there by my family to watch various groups. No-one thought I was capable of having a hit record, though - they'd just heard me yodelling away to myself in the bath! Then one day at home, I just burst into song and Dad decided to put me on record straight away."

Kim's the first to admit that she doesn't lead the glamorous life some pop stars do.

"I don't have time to lead a flashy, exciting life. I'm too busy helping Mum look after my kid sister, Roxanne", she grins. "I've never really thought about going to lots of discos and parties and getting myself a smart flat in London - we're a very close family and I enjoy staying at home. We live in pretty rural surroundings in Hertfordshire and I guess my bedroom just about sums up my personality", she grins.

"For a start, I hardly keep any of my clothes in the wardrobe. It might drive some people absolutely crazy to see their stuff all over the place, but I love it! I just put them where I can see them all 'cos I just can't stop looking at clothes! I buy a lot of blouses and things at jumble sales - it's great fun searching for bargains! I also like shopping in some of the more outrageous London boutiques. I've got a real passion for very unusual styles of shoes, and I always buy them from the same shop. Apart from collecting clothes, I'm very interested in paintings", she says.

"I've got quite a few on my bedroom wall - but unfortunately I can't afford the ones I'd really liek so I have reproduction copies of them. I also like pinning tons of photographs of my mates on the wall. Friends are very important to me", she says. "I think it's a pity that when people leave school, they don't bother to keep in touch. I'm always scribbling mad notes to old schoolfriends and sometimes I just like to look at the photos of them and remember the good times we had together."

"As you can probably gather, I'm a mad keen collector of just about everything. But my favourite collection just has to be my records. I don't know how many singles I've got but I seem to be adding to it at an alarming rate just now! I've got tons of 45's by David Bowie, Elvis Costello and Aretha Franklyn - they're definitely my favourites. Mind you, I also have all Gary Glitter's records and I used to be a member of his fan club. I'm not in it now but I still think he's terrific!"

It looks like there's a glittering future in store for Kim, too, and she's Wilde-ly excited about it! 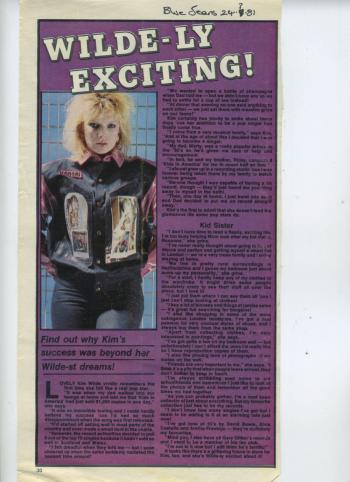