It's simple to flatten the image of the young Wilde spirit. But blonde Kim isn't as dumb as the Debbie Harry cover pose might suggest. her self-titled debut album on RAK comes hot on the heels of the single hit 'Kids in America' (a wry commercial ploy by a girl from Hertfordshire, England).

It has delightful naivety about it. Teenage brother Ricky Wilde wrote most of the music (with daddy Wilde) and is credited, despite his youth, with the production. The sound is rough and ready, with an occasional energetic surge reminiscent of early Suzi Quatro, but the rich innocence of the music and her energy makes it a success. Not dazzling but bright enough to suggest a glimmer of hope. 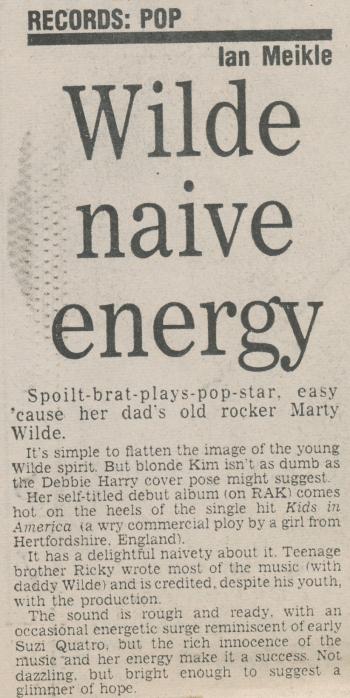