With whom is Kim in love?

Until now it was always said that it was part of Kim Wilde's image to not laugh during performances or on photographs. But during the interview with Desirée during the last "Musicbox" she has made fans unsure. Because when answering the question whether she was forbidden to laugh, she said: "I laugh regularly!"
Bravo asked several fans whether they preferred Kim laughing or with a serious look on her face.
Simone Marshall (16) from Nittenau: "A laughing Kim is more sympathetic".
Gitti Herz (15) from Kempfen: "She looks more friendly when she laughs. She should do this more in the future".
Wolfgang Scholz (15) from Bad Ems: "When she looks so serious it seems a bit dumb. When she laughs she's more sympathetic."
Alfred Baumgartner (14) from Munich: "Kim should stay serious, that looks more interesting. Besides her there are only laughing stars."

Kim, what keeps you from laughing on pictures in the future?
In front of the camera I do my best to keep from laughing, because my mouth would look too big and wide. Also a serious, mysterious look fits better with my songs. Privately I do like to laugh. But I don't think I'm very photogenic then. But fans seem to think differently about this.

Now to a subject, that is very interesting to fans as well. Are you romantically involved with some boy?
I can get along with boys very well, because I grew up together with my brother. I often have a good contact with boys very quickly, and I have a very uncomplicated relationship with them. But that's not enough for a romance.

You're together with girlfriends a lot. What do you get from such a relationship?
Friendship with girls go deeper, I think. They have more meaning and they're worth more emotionally. My best friend Claire Smith, she is a therapist, I have known since my first year in school in Hertford. Our characters are very different, but I can talk to her about anything that moves me. I also have a lot of fun with my friend Juliette de Vine. I've known her since I was in art college in St. Albans, she's singing in a band now as well.

What should a boy have, how must he look to evoke feelings of love in you?
I'm not so interested in what he looks like. Most importantly, he isn't too fat and he should have long legs. His height and colour of hair are not important. It's most important that he's got character and personality.

Have you ever met a boy who kept up to these criteria?
Yes, when I was 13 or 14. At the time a boy named David was on the same schoolbus that I was on in Hertford. I was head over heels in love with him. He had that certain something, this selfconsciousness and independence, that I like. I was envious of him because I didn't have these qualities myself at the time.

What happened with this love?
It remained very one-sided. Months went by, without him talking to me. I lived for the moments we met, to even touch him fleetingly. He broke my heart because he didn't look at me or winked at me. during the evenings I cried myself to sleep, wrote sentimental poems dedicated to him in my diary. Today we both laugh about this, when we meet by accident. In spite of all this passive and short active time with David belongs to my most beautiful memories.

How many boyfriends did you have besides David? Does Bob King from the group Tenpole Tudor belong in this list? There are rumours about this...
I may have had some five boyfriends with whom I'm still in contact with nowadays. Mostly we go to the disco or parties together. Bob King from Tenpole Tudor does not belong to this circle of friends. Ricky and I met the group during Musikladen in Bremen. After filming we went to some bars together and had lots of fun. Often we also see one another in London.

You went to boarding school in Dulwich (South London) for a few years. What are your most unhappy memories of that time?
That I was dressed in an ugly pink dress on Sundays to go to church. On Thursdays I was allowed to watch Top of the Pops at my request. But a teacher was there as a chaperone and when she saw anyone who fitted her thoughts of decency, had slightly too wild hair or talked too loosely, she turned my head away. I then watched from the corners of my eyes to the picture on the screen... 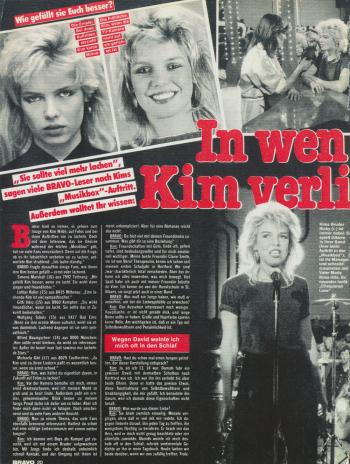 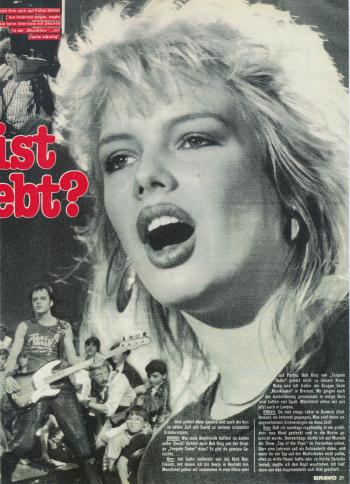