It was as far away from the frenzied world of rock 'n' roll as you could get. There were no limousines, no police escorts, no drugs more intoxicating than warm beer, and the only groupies at the back door of the school gymnasium were 13-year-olds, who had arrived by bicycle.

"God, it's like going on a day trip to Bognor", said Kim Wilde, looking out of the coach window at a town that only a few days ago neither of us had ever heard of. But it wasn't Bognor. It was worse. It was Slagelse, where the people go to bed with the sun, and the only restaurant closes its door shortly after 9 pm. There isn't even any sea.

But it was here, among the piggeries and dairy farms of Eastern Denmark, that Kim Wilde finally forsook the isolated security of a recording studio to go out and face a live audience for the first time.

She's already a star, of course. Her records, like "Kids in America", have sold in bushels. She is a celebrity, a face, an animated mane of blonde hair who has already acquired her own cliches, the "New Brigitte Bardot" being the most notable.

That would have been enough for some. But as her father, another Wilde called Marty, who was once almost as famous as his daughter, explained: "There are times in your career when you've got to lay your prestige on the line, and take chances. One day, mate, you've got to get out there on the stage, and show the people what you can really do."

That day came this weekend. But if Marty had had his way, mind you, it would never have come - in Slagelse, or anywhere else. A survivor from the seminal days of British rock, he did his best to discourage Kim's ambitions. "The mortality rate, the mental mortality rate, among female singers is very high", he says. "They're very vulnerable, and pliable. I know one world-class singer who was unattached, and suddenly a guy walked into her life and took over completely - her business, the lot."

Kim is still unattached. "You don't see me cuddling up to anyone, do you? I haven't got the time." And so far, no adventurer has moved in to take over her career. But Kim's career has taken over her family.

Her 20-year-old brother, Ricky, produces her records and co-writes her songs with their father. Mother Joyce, who was a "Vernon Girl" on the old "Oh Boy" television show, looks after the business side of the Wilde enterprise.

They all live together, in a rambling thatched cottage in Hertfordshire, that once belonged to Prince Bernhard of the Netherlands. They were all with her on the coach, as it wound its way into the provincial backwater East of Copenhagen. And they were at the gymnasium; Marty fretted over the sound, Ricky on stage fretting over a broken guitar string; Joyce simply fretting.

At the centre of all this family affection is a pert, talented, lively, bubbling, ingenious 21-year-old, who still carries the last of her puppy fat, and is poised to become a major international star.

Each stage of her career has been a family affair - from the release of her records, to the image she projects. And now, this incongruous setting of a school gymnasium in Slagelse.

"She's not manipulated - she's not dumb", says her father. "We all do our bit for her. But it's her career and her life and she makes most of the decisions herself."

She makes most of them at home, but she helps her mother care for her baby brother, Marty, and three-year-old sister, Roxanne. "I don't think I'll ever really leave home", she says. "I know I'll never leave mentally." To which her father replies: "Once the bird flies, it flies free. But in our case, it often comes back again. But we don't try and live her life for her."

Or, it seems, take advantage of her. "Of course, I could have used Kim's success, and gone around and done the big bit for myself", says Marty. "I had a couple of offers. But I've had my career. Now I like to sit back and watch my daughter have hers." Making sure, at the same time, the money that comes in doesn't disappear the way it did when Marty Wilde was at the top.

"When Marty was a big star, we were broke", says Joyce. "We didn't have any money at all. We kept wondering where the next cheque was coming from, so we could buy the kids Christmas toys."

A shrewd, yet warm and open woman, with a voice remarkably like her daughter, it was Joyce who took over the management of Marty's finances. Now she does the same for Kim. And a bit more besides - while Marty was taking his daughter to "all the really grotty places an entertainer has to go to, to try and put her off this business", Joyce was quietly encouraging her.

She paid for her piano lessons. When Mickey Most, the pop mogul whose career, like Marty's dates back to the 'fifties, offered Kim a record contract, it was Joyce who won her father round. "I always knew that was what Kim wanted to do - there was no stopping her."

There was no stopping her this weekend, when Kim Wilde at last made her debut in front of an audience, more demanding than her own family. It wasn't exactly a difficult crowd to face - just 1,800 local children, who had never seen a rock show before and who would probably have clapped if Kim had stood stone still, and recited a nursery rhyme. Which, of course, is why she came to Slagelse in the first place.

But she did more, much more than that. And by the end of the show, the usually stolid Danes were on their feet, rushing the stage and hurling beer bottles into the air. For Ricky, it was "bloody wonderful. I've seen things like this in the movies. Now it's happening to me."

For Marty, it was a time for cool professional appraisal - the lights, the band, the sound - and for a few words of praise. "She's better than I was on my first gig. Miles better."

For Joyce, it was all too much, and she started sobbing. "I feel so bloody proud", she told me, after the tears had ried.

For Kim, herself, it was the moment to savou the adrenalin pump, which of course, is what this business is all about. "I don't really know how I feel, but I know I've never felt like this before", she said. And for the Wildes, it was another, carefully thought out, step in the family plan - to make Kim a superstar. 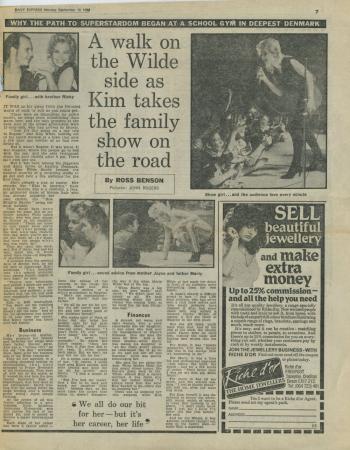