Success has made pop singer Kim Wilde a nicer person says her dad.

And Marty Wilde, who writes his daughter's hits, added: 'She is doing what she wants to do. And she is not conceited. Conceit is one thing I would not tolerate: not while she's living under my roof.'

It's a year since Kim's lifestyle speeded up when she was 20 with her first big hit, 'Kids in America'. Since then her name has never been out of the charts. There have been three further hits, and a Top Newcomer award. She has sold more than a milln records in eight months.

'My recording chief, Mickie Most, wants to make me an international star', she said in a matter-of-fact voice. 'I will also do my first concerts, probably in summer.' Kim's songs are written for her by her father, while 19-year-old brother Rick produces the records. She went on: 'I haven't always been happy about being pointed out as a pop star's daughter. There was a period when I felt my parents position was ruining my life. I had to learn to accept my background. I'm in no hurry to leave home, although I do like my privacy.'

And what about her friendship with rock star Steve Strange? 'We're just good friends', she said. 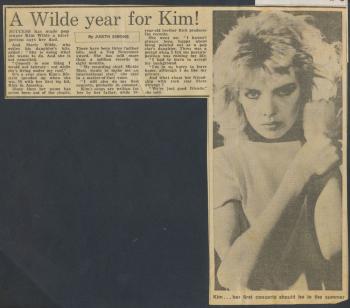