Pop singer Kim and wrestler Big Daddy are just two of the many celebrities who will be taking pledges in the phone-in appeal which last year raised over £1m for children in need. Pitured with them are Lee, aged 11, Helena, ten, Ben, seven, and Dave, six, from a special school in Wimbledon. The youngsters enjoyed a holiday at a school camp as a result of the appeal.

BBC1, Radios 1, 2, 3 and 4 and Local Radio will be linking up tomorrow and will be remaining on air during the evening to receive donations. Among the other stars taking part will be Terry Wogan, Gloria Hunniford, James Hunt, Lulu, Adam Ant, Petula Clark, Andy Peebles and Chris Serle. 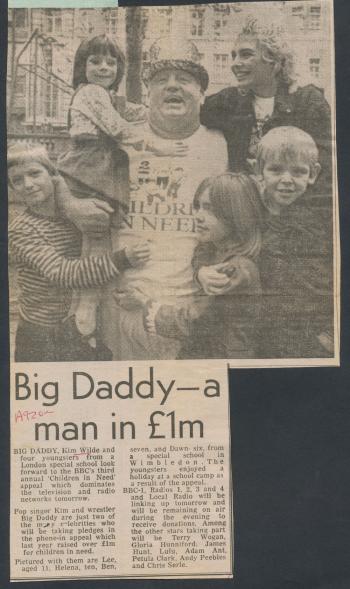