Blonde bombshell is primed: UK is about to go Wilde

Ray Purvis telephoned Kim Wilde at her home in England this week to find out the latest about her forthcoming tour of Britain and the US.

Kim Wilde, the blonde bombshell who rocked Australia last year with 'Kids in America', is about to go on tour in England for the first time. In October, Kim and her band - with her brother Ricky on keyboards, and with the session drummer from her first LP are setting off to criss-cross England playing at 2000 and 3000-seat venues. Then they go to America where 'Kids in America', which had a late release in the US, firmly established in the charts.

Speaking on the telephone last week from her home in Stevenage in England, Kim talked about performing live before an audience for the first time. 'Live performances are a do-or-die situation', she said. 'You can't do a second take like with videos. I'm as confident about performing on stage as I can be but as far as nerves go you better ask me how I'm feeling a minute before I go on stage.'

Prior to the tour, Kim will release a new single which she has recrded since the sessions for her newly-released second album called 'Select'. 'That LP's been out a while in England now', said Kim. 'It got into the Top 20 and the two 45rpms off the album, 'View from a bridge' and 'Cambodia' were very popular here. They got into the Top 10. We didn't want another track off the album as the new single so we've been in the studio since the album's release to record some new material.'

Kim has just recorded her first project with a producer other than brother Ricky. Two months ago she was asked to record a song to accompany a Japanese TV advertisement. She recorded it in Japan with Masami Tschuiya, a former member of Yellow Magic Orchestra and currently with a band called Ippu-Do. Because the TV advert will not be shown outside Japan, she agreed to the song being released as a single in Japan, but it will not be available anywhere else.

Kim is not interested in working with anyone other than her songwriter/producer brother. 'The problem is that Ricky is so much in demand now', says Kim. 'He has just finished the solo album for Japan members Mick Karn and Steve Jansen ad he's got a whole lot of projects lined up for the future. I can't see any reason to work with anyone else, because we are by now a proven successful combination. Anyway, I work best with him - I'm much more at ease.'

And how has success spoilt Kim Wilde? 'Well, success hasn't hit me hard. It was a slow process catching up to me. After the first album, I thought it was all a bit of an anti-climax. That was probably due to the sixmonth gap between the recording of 'Kids in America' and its hitting the charts. Now I can't go shopping anymore, even though the people in London are getting used to seeing famous faces in the street and the shops. They are a bit blase about it. I just don't get any pleasure out of shopping anymore.'

In her private life, Kim does not hob-nob with members of the music fraternity in England. She has her long-standing friends who are outside the entertainment world. And, despire the current rumours drummed up by the English papers, she is definitely not engaged or seeing-a-lot-of a certain musical identity who she would prefer we didn't name.

When Kim was in Australia for a publicity tour about eight months ago, she promised she would be back with her band to perform. However, she told me this week: 'We haven't got any current plans for an Australian tour, although we do want to perform in Australia. Our next tour will be to the US and anything can happen after that.' 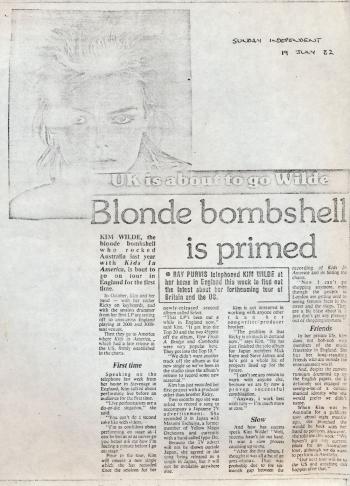