Blondie 'made in Europe'

So has been nicknamed Kim Wilde, the revelation of 1981. We interviewed her.

So now they have known in England. Since only one year to the musical chronicles the world, Kim Wilde is the daughter of the famous kind. His father was a 'rock star' of 60 years, maybe not so great and brilliant biography of Kim as the softened facing us today. Of course, how can you not be gentle, submissive, abandon any ambitions of controversy and being naughty in front of a lady so sweet, a voice that will capture you without feeling treacherous immediately.

At just twenty-one, Kim Wilde suddenly exploded last year in her native England with a single 'Kids in America' in a flash that has polarized the attention of the press and British public. Blonde, delicate, doll face, a beautiful girl but not too much, Kim Wilde has quickly become a symbol, she went to fill the void of female star of contemporary music in England that many colleagues had left, the various Hazel O'Connor, Kate Bush, Toyah, have not had one of their mixture, complete in its components, especially the skill and beauty. A mixtura that certainly Blondie and Kim Wilde have.

When I met Kim in Milan, recently, I found her more beautiful than you might guess from the photos of the magazines, simpler, more timid and ill at ease as much of the 'public image' would make you believe.

Kim, I want to know first whether your musical career and also due to his father's will or better, or is it rather the result of a strong and clear vocation?
The second hypothesis is correct. I've always felt the desire to sing, to be part of 'showbiz', even if this desire was also probably due to the career and example of dad. If he was a baker, that I certainly do not think I would become a baker myself. To get into Art College was my idea, as well as leaving it and start making records.

So your father has ever driven you towards this direction?
Absolutely not, indeed, what that time I think it was good that I pushed when I was demoralized when I lacked the strength.

On the other hand, there was a conflict with your brother, the other musician in the family?
No, certainly not. Even if Ricky was looking for a solo career, he can always follow it. After all he is the one between us that creates musically, I simply sing.

The rating on the musical creativity leads you to believe you're feeling musically perhaps incomplete, is not it?
Yeah, sure. On the other hand is only a year that I'm interested in this job with all of myself and then I only have twenty-one. But definitely in the future I want to be more involved in musiclae maybe play seriously, who knows.

How come you spent so little time between the release of your first album and the last 45s 'Cambodia'?
Unfortunately, these are the rhythms imposed by the market. The EMI in London and has long insisted they wanted the single release to come soon enough. 'Hit the nail while it is hot'. I think that the current policy in this area.

Do you listen to a lot of your English contemporaries?
Yes, of course, more than I can. I try not to stop, to assimilate as much as possible.

Even if you do not love the music charts, how would you define your music, or at least what were your greatest influences?
I think it's impossible to pigeonhole the music with classifications that almost always turn out to be sterile and inaccurate. But I know which is your favorite sport. We could say that my music and rock matrix, but inside there are too many other things to stop there. My influences were Ferry, Bowie, Eno, but also a lot soulmusic, hard trial.

Plans for the immediate future?
We are working hard on new LP, for which we have already prepared 8 pieces. We will then make a video for the album release. Finally, I very much hope that we can finally start a really great tour, of course including Italy. 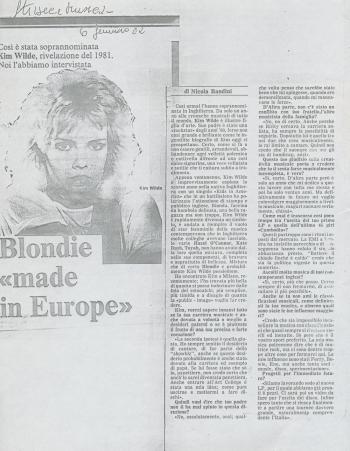