Absolutely flawless. There isn't a single wrong step on 'Select'. It's sparked and polished to every last nuance of design. It stands as some kind of zenith of '80s reactionary pop: radiantly silver, the dazzle so intense you could almost fear for your ears turning to ash as it flips glibly from track to track, unfolding like a preset jukebox.

For a start there's 'Ego', a familiar (of course!) 'You're So Vain' sort of song made needle-sharp by a synthesised trampoline bounce that solidifies into straight midriff punches at the key (hook-moments). It leads to the surrogate mysterioso wild-in-the-neon-streets exposition of 'Words fall down', lit by the same looming skyscraper keyboards and wheeling on the same tick-tick-tick doomdrum rhythms, and by the time 'Action City' has explored its somewhat limited brief - vicarious kicks in a Huxleyan child's scenario - you realise what Ricky Wilde is doing. He's constructing a cosemtic counter of contemporary pop.
Stroll on by and sniff each of the same bottles. Along the line we have an impeccable reprise of 'Empire State Human', brushed and blown up into something called 'Just a feeling'; a blank kewpie doll pliancy in 'Take me tonight' and 'Can you come over': and a narrative piece in 'Chaos at the airport' whcih isn't a far urbanised remove from a country tragedian's yarns. But there's no need to detail all the sources.
Of course, Wilde has done his homework well, While every track on the record has this protective all-over sheen of electronics - Wilde listens diligently to his radio - they are all sewn to what serves as the classic pop construction. Any of the songs can act as a hit single, although that shouldn't bestow any gleaming excitemenntof NEW POP THRILL on what is a flat, emotionally neutralised collection.
Because despite their pristine perfection, Wilde cannot instill any resonance into his productions. With every fold smoothed out and all glimmers of idiosyncrasy or adventure extinguished Wilde had relied on his father's memories - a rock 'n' roller's primer on the success points of a pop tune - to fashion the anatomy of every song. It renders 'Action City', for example, as a facelift, not a genuine creation. When set against the extraordinary sophistication of Horn's work on 'Give Me Back My Heart' Wilde structures are made to seem childishly plain.
'Select' must go down as an excellent opportunity hopelessly missed. It was open to Wilde to involve an irony in the record that could have simultaneously suckered the usual clamour for a bleach siren in modern dress and provoked a reappraisal of this singer's actual function inside the music - which might have seemed cruel to the girl but would have been scarcely any less demeaning that the role she has to play here. Instead, Wilde has believed every word he's read about his sister and has let it all influence him in the most obvious and insipid ways. But why should he worry? There's plenty of hits here. 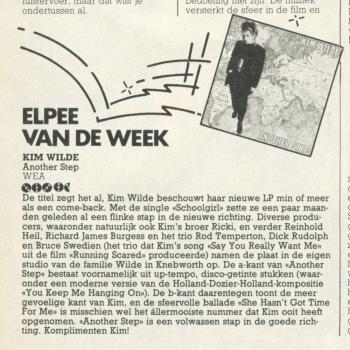