In the past year, Kim Wilde has left her art school aspirations in the past, produced (along with father Marty and brother Ricky) a string of hits and a best-seller album as well as made a firm impression on the public as the latest in a line of blonde haired, blue-eyed and well disposed adolescent pin-ups.
Kim has just turned 21 as witnessed by her birthday bash at Knebworth House. Last year, she was contemplating the chance to further her education. The foundation course at art school gave way in favour of a recording career after Mickie Most (her manager as well as Rak boss) took an instant liking to her voice on backing vocals to one of Ricky's tunes.
The old TOTP fiddle has never been quite so apparent as in Kim's case, but it's laughable. The Kim Wilde band, as seen on various promo videos and TOTP appearances is nonexistent as such. The records are formulated, written and produced by Ricky and Marty with the gathering of James Stevenson, Calvin Most and Ricky again all for effect. This works on the principle that record buyers would rather see a band on the television than a solitary figure. This obviously creates problems with touring commitments, as Kim, to date has only played live TV shows in Europe. Ricky also seems embittered towards playing in a band, preferring just to remain songwriting. Tour plans as for any major band are dubious, but Kim seems enthusiastic on the whole.
"We're definitely going to play a tour here soon, but we haven't really got any plans so I can't talk about it. I hope that James' new band will come and do the tour."
James' new band, though under wraps at the moment, comprises Calvin, Glen Matlock and ex-Original Mirror, Steve Allen. Maybe a viable commercial proposition though only at the demo stage right now. "We have a syndrum and stuff", continues Kim, "but we got bored with that. As far as James goes, he only played on 'Water on Glass' before. I happened a bit by accident, because we used him on the videos and Top of the Pops for a visual purpose. I'm fed up of miming, it's really driving me crazy, I want to get out and play live and it'd be nice to use James and his band, so when Micky gets back I'm going to have a word with him."
All the material is written under the auspices of Ricky and Marty, so this leaves Kim with singing as her only responsibility. Maybe self written flipsides will be in order?
"Up till now there's been no need to write any material of my own. I've always written lots of lyrics and melodies, as I play piano, but I'm not going to force something alien onto the Kim Wilde thing because I don't want to give people something they don't want. I wouldn't like Abba to split up and Frida to go off and make a solo record, because I like Abba together. I didn't like it when Debbie Harry split from Blondie. As for b-sides, I like them because you can experiment more, I usually end up liking the b-sides more than the a-sides anyway. I'm sure David Bowie hates 'Space Oddity'." After the basic pop sensibility of the first series of singles, 'Cambodia' seems to have struck a different chord entirely (a minor, dealing with synthesised blips and a strange, haunting love song). The style is slowly shifting emphasis towards a presumably Kim Wilde SOUND. The song itself is pretty self explanatory, says Kim, though I never grasped it myself, an explanation is definitely in order.

"'Cambodia' is a mysterious love story, like Casablanca. Flying off into the night to never return. One wonders what happened to the guy. It's like that Gene Pitney song, '24 Hours From Tulsa' where you tend to think, who is that woman who stopped him going back to his wife, which isn't a particularly profound thing to think about but you can't help wondering. It's very haunting."

The videos to her singles seem to epitomise a certain mood too, from a straight 'Kids In America' type production to the full-blown 'Cambodia' scenario. Brian Grant, the man responsible for these mini epics, seemed to get overexcited about the latter, but justifiably so and all in order with the tune. "I like videos, they're a nice projection of the singles" remarks Kim. Recent developments in media exposure also embark on the erection of Ms. Wilde as a demi-goddess, though Kim seems less than happy here.

"I don't get bored with interviews. I love talking to people about what I do. The only time it gets tedious is when you're in Australia and they don't know who you are, they ask you 'what's your name' and 'wasn't your father...' and you get ten of those and six phone calls asking you the same question. I've never felt so bad as when I was there. I used to just go mad and walk out of the room. I couldn't do it anymore, the only thing I could do was laugh and have a few drinks. I had to laugh, I don't really feel I have to be nice to people I don't want to be nice to. It's like this interview in Hot Press I just read and it's quite hurtful."

"I remember talking to that guy. It was just full of shit, this guy didn't know his arse from his head. He didn't know if he liked me or not. And he obviously felt very guilty because one minute he was praising me down to the ground and the next he was slagging me off to cover himself. He was such a tosser, why did you have to do that? Why don't you have the courage and conviction to say you like me you bastard, or you hate me, why cover yourself with cross-statements? Just recently, Kim Wilde has become more hip, like I like her but I shouldn't, I get a lot of that attitude."

So where do I fit in? Yes! I like Kim. For someone in her position at this early stage, she is admirable in conviction. She's on the case and positive about her work and play. In fact, this could be the spawning of a new nobler breed of home-grown teen idol, let's hope so. 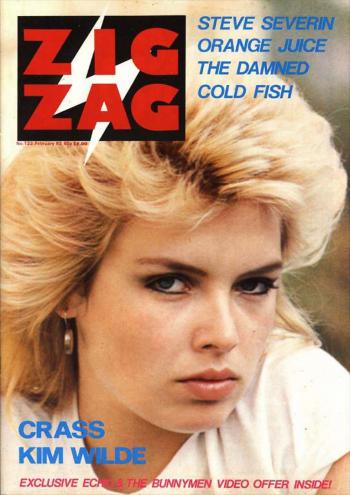 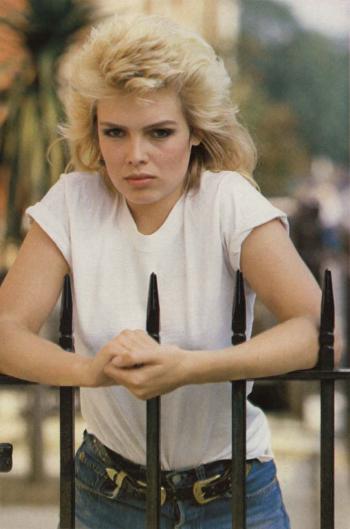 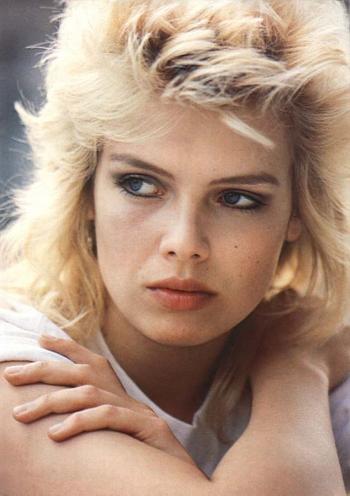