Pop star Kim Wilde thought long and hard before following in the footsteps of her father, Marty Wilde. Now her career promises to be just as successful as his.

In the year that John Lennon formed the Beatles, a baby daughter was born to a British singer who was already successful. The father was Marty Wilde. At 21, Wilde was a heartthrob star making such hit records as 'Endless love', 'Rubber ball', 'Donna' and 'Teenagers in love'. He was mobbed by adoring girls on concert tours. Like Cliff Richard and Billy Fury, Wilde was in the vanguard of the British pop movement of the late fifties. In 1960 he and his wife, Vernons Girls dancer Joyce Baker, had their first child, Kim.

Today 21-year-old Kim Wilde is herself becoming a major international pop star, and has sold some six million records. Her blue eyes and sultry pout feature in pin-up pictures in thousands of pop fans' bedrooms. And with a considerable musical talent, allied to a powerful personality, she is poised perfectly to take advantage of the new era of video, which is used to project today's stars and shape their careers. An estimated £75,000 has been spent in marketing the Kim Wilde "look", and providing British television programmes like Swap Shop, Tiswas and Top of the Pops with ready-made footage of her in action. Copies of the tapes have been sent all over the U.S. and to 60 other countries.

'Video is tremendously important in launching a visual artist like Kim', says her mentor, leading record producer Mickie Most, who has handled such stars as Lulu, Hot Chocolate, Donovan, the Animals and Herman's Hermits. 'And she photographs well'.

'I did not dream she'd become a pop star like me', says Marty Wilde. 'That 21 years after she was born I'd be writing songs for her, listening to her in the recording studio, and seeing her name high in the best-selling records list. It's all rather unreal'.

During Kim's teenage years he had tried to dissuade her from becoming a singer. Marty had seen too many girls with broken dreams. But Kim was determined. 'I'd grown up in a house full of music. Dad was a successful singer and musician, Mum was in show business, my brother Ricky played guitar and keyboards and sang - and records were being played all the time. It seemed inescapable. But I did try other things on the way, to make sure there was nothing else. Well, there wasn't.'

After gaining seven O-levels and and A level in art at Presdales all-girl grammar school in Ware, Hertfordshire, Kim successfully completed a one-year foundation course at the Hertfordshire College of Art and Design, St. Albans. Meanwhile her father had relented in his attempts to steer her away from music and had allod her to be his backing singer during some of his cabaret performances. She also started singing along to the demonstration records her brother Ricky was making at home.

'At that point', says Marty Wilde, 'I realised Kim was heading for the stage and that nothing could stop her. She just sounded so right.' The Wilde family had always been financially secure but Kim's father had insisted she should be careful with money. 'I once drove Kim and Ricky through the Gorbals in Glasgow to impress on them what a good life they had', recalls Marty Wilde. Throughout her rise to fame Kim has kept that lesson in mind.

The transformation of an impecunious art student to a rich and famous 21-year-old flying to engagements around the world is typical of the unpredictability of a pop world hungry for new talent. But her route to stardom was unusually direct. Kim's brother Ricky had already made four records by the time he was 11. In the autumn of 1980 he was, at 18, active as a songwriter, making tapes to demonstrate his work. He took one, featuring a song he had written called 'Kids in America', to Mickie Most. As Kim had sung on the tape, Ricky took her along with him to meet Most. She was wearing scuffed jeans and a black jumper she had bought at an Oxfam shop.

'There was something about her, an animalism which is obvious now on television and in photographs, and which comes over even stronger in the flesh', he says. 'I thought 'Kids in America' could be a hit and I just knew from looking at her that Kim was a future star. Her vocal sound was promising and her face looked right for the time. She had a great way of carrying herself; and independence with which I guessed other teeagers would be able to identify.'

'Kids in America' sold two million copies. As a result Kim appeared on a number of television programmes, including 'Top of the Pops'. 'When I first heard 'Kids in America' on the radio I was so impressed that I rang up Mickie Most and asked him who was singing it', says Suzi Quatro, the 31-year-old rock singer and guitarist. 'There was an edge, a husky quality, which made it a certain hit'. Her prediction proved right. Kim Wilde's second single, 'Chequered love', did equally well, and by the time she had completed her third record, 'Water on glass', Mickie Most judged that the public was ready for an album. With Ricky writing the music and her father providing most of the words, the family completed eight new songs, recorded in the RAK studio in St John's Wood, London. The album has sold a million copies.

A year ago Kim Wilde was rather dumbfounded by her sudden success. 'It's great fun, but I can hardly believe it's all happening', she said then. 'I expected a hit, but not so fast'. Today, having travelled the world, she has gained composure and confidence. Yet she still runs the H-registration Volkswagen Beetle she bought with her brother two years ago, and still lives at home. While planning to buy a London flat - 'for convenience and investment, not to get away from my family'- she cherishes the closeness of family life. The Wildes live in a five-bedroomed thatched cottage, with a studio for music and two acres of land, at Tewin, near Welwyn Garden City. Kim and Ricky have been joined in recent years by another brother and a sister, on whom Kim dotes.

She now dresses in plain black trousers, black boots and casual leather jackets bought for a few pounds at Kensington Market. She enjoys good restaurants but watches her weight. Sitting in Micky Most's office, sniffing through a cold but efficiently answering his telephone, Kim talked about her school years. Her flat speaking voice contrasts with the theatrical swoops which characterise her singing. 'There was never a sit-down conference at home at which it was decided I would be a singer. But my Mum encouraged me right through my teenage years. At school I wasn't naturally bright. I was good at languages, drama, music, sport and art, but I wasn't too hot on the sciences. I wasn't a very diligent worker but I enjoyed school most of the time. I went to art college for a creative environment. I learned a lot, but I had to decide whether to stay on or whether to go wholeheartedly into music. One day I realised I had more records at home than books on art, and I knew then that music was the only thing.'

The principal at Hertfordshire College, Colin Hunt, remembers Kim as 'not shy or retiring, but certainly not an outrageous person who wanted to stand out from the others'. He knew she was a pop star's daughter, but she had asked if this could be kept from the other students. She used the family name: Marty Wilde was born Reginald Smith. 'I always had a solid base to build from, and respected my Dad's work. I learned a lot when i was his backing singer. I greatly respected him for putting on a good performance, whether it w sa big show or a small one.'

She is adamant that there is no generation gap, musically or otherwise. 'We usually like the same sounds we hear on the radio. His musical values are sometimes different: understandably, because I'm younger.' Just two confrontations seem to have punctuated her life at home. At 17 she 'discovered the male population', in the words of her father, and incurred her parents' wrath by staying out too late at night. Kim now has several boyfriends - 'I would be strange if I hadn't' - but not one she sees as a permanent partner. 'It's too early in my life for anything serious'.

Her shock of hair caused the second argument. 'Right up to art college I was mousy and felt very frumpy. One day I decided to go out and have it dyed blonde. But it came out at first as bright golden yellow. Mum didn't like it at all. That caused a scene. But then I dyed it properly and now my hair has become a sort of trademark.'

Despite her fame she moves around freely, disguising herself by putting her hair up, wearing a headscarf and different clothes. On a recent ski-ing holiday in Spain she was hardly recognised. 'And by the time people have said, 'Oh God, doesn't she look like Kim Wilde?' I've gone.'

Her current audience is mainly made up of 12 to 18-year-olds. Girls identify with her 'street appeal'; boys find her attractive. Her future, says Mickie Most, could be in films. 'That means becoming a big recording success in America, which we have yet to conquer. This year our aim is to sell two million copies of her second album. Then we can plan a concert tour.'

Most says he has invested something like £250,000 in her career: money spent on recording time, making video-cassettes and organising promotional visits to Australia, South Africa, Europe and the U.S. One person who has no doubts about Kim's staying power is Clare Smith, an occupational therapy student in Oxford and her best friend for the past 14 years. They attended primary and grammar schools together and were inseparable as teenagers, bundling carnations at a garden centre on Saturday mornings to earn £1 each as pin money.

'Kim hasn't changed one little bit', says Clare. 'She's always been determined. She'll survive everything and always do well, because underneath she is a very stable person.' 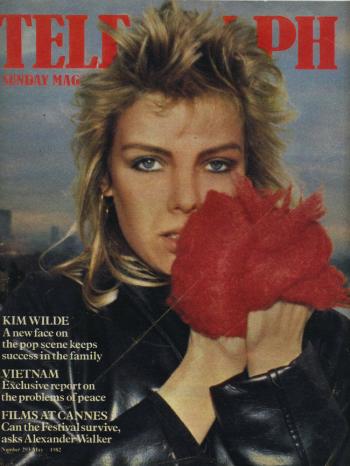 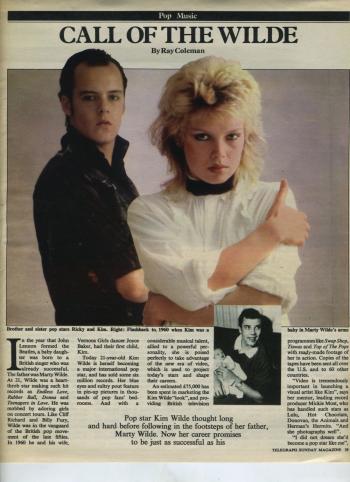 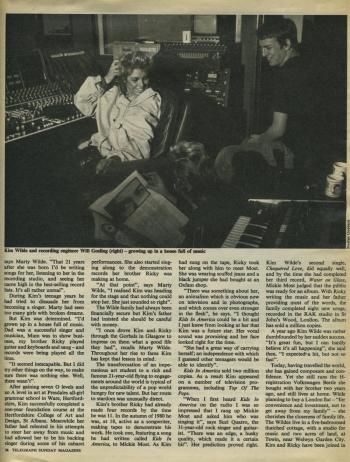 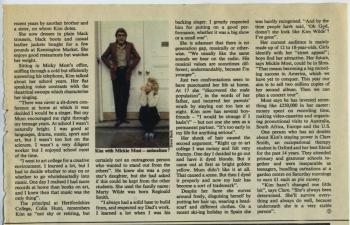