Of course Kim Wilde is just another blonde doll who sings and dances at the end of strings of the business, of course. But that does not include love.

Ricky buys albums by Kim Wilde in a shop specializing in imports. It is true that he preferred the first LP, the one where the killer lolita asked, perversely ingenuous, in the middle of a gang of thugs riffeurs to Tronches. This disc was full of bleeding pop songs. Now the composer brother, Ricky Wilde, flashes on the synths. Disease of youth, it will pass, and then still in the band that accompanies Kim on stage, he invited the twanging Corsica in person, Henri Padovani - and this one will never exchange its Bigsby vibrato against a sequencer Japanese alles. In any case, Rickie has a deep respect for dad, Marty Wilde, the English Elvis between 1957 and 1962, who recorded so brilliantly 'Endless Sleep' and 'Teenager in Love'. Kim is the little gem of a line of stalwart rockers. And she is so beautiful.

The radius of the bazaar supermarket, Josy bought 'View from the Bridge', the last single of Kim Wilde, and then the lipstick. But it will overflow a nice little, she will never have full lips and greedy of his idol. Hair is ok, she cut a picture in 'Hi' and brought it home Coiffure Liliane quon asking him to do the same. Before she was a fan of Olivia Newton-John, but one day on TV, she saw the video for 'Cambodia' to 'Deck 45'. Shock. A little later, Kim sang a duet with Johnny in 'Formula 1 1' on the first of Carpentier. Since then, Josy cutting items and buys all his music. She collects posters, and is not jealous when her friends discover when they turn the blonde English singer. At night, Josy dream of lips, voice, talent and all the boys love Kim Wilde. She is so beautiful.

The rock was in need of a star girlfriend. Because Ms. Harry takes the bottle and no more mystery - and then, lately, she denies her into donning blond wigs as colorful as hideous. The female rock that sparkles so right these days does not fetishes: The Go-Go's are good and healthy Californians, Joan Jett an otter to recover, sure, but I'm talking about IDOLS. Girls that displays on the walls of room on the lapel of his jacket and in his conversations. Kim Wilde has all the qualities required to take the role of Jean Harlow in the electronic age: the golden wild, sensual voice, the perfect plastic. And even the name, short and stinging like a heroine of 'pulp comix'. And she is beautiful.

Me, I buy disks Kim Wilde or the supermarket or in the trendy shops. It gives them to me. But I conceive no shame, because she realizes that each disc is sold around the world several million copies. And it fills me with joy, although I usually call rather for the Dogs, The Cramps or the Fleshtones reach ten thousand. I listen with undisguised delight the pop songs that eternal whispers the lovely lady, and it moves me. His hits are lectures, his rocker look is essential, his honeyed voice caresses me in the direction of the hair, and I confess that I also have his poster hanging on a door, which had not happened since ... Blondie, exactly. I want her to return fire to guitars, but it can do what she wants, I always give him reason. She is so beautiful. 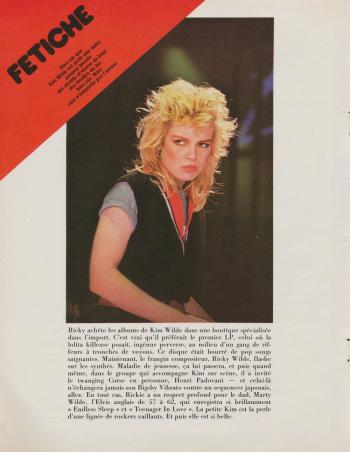 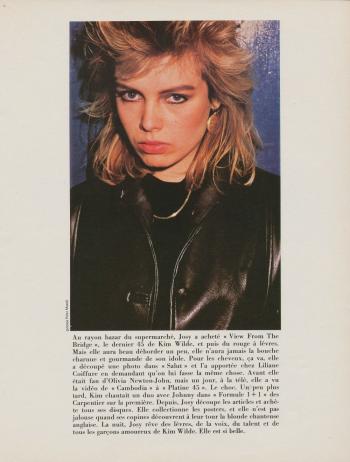 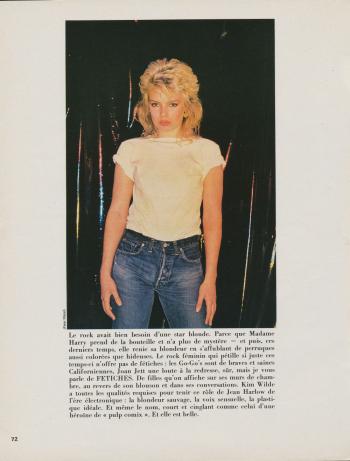 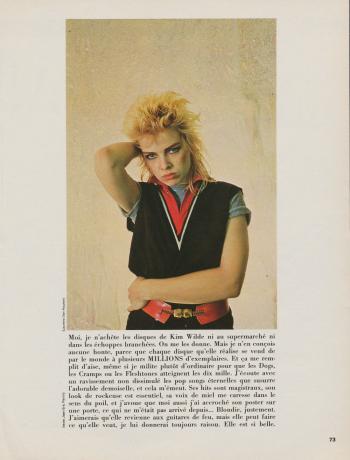