Life has meaning again. The Wilde family has finally decided to send sexy daughter Kim on tour. The tiger is being let loose. Early October she started her English tour in Bristol (and why weren't we there), going on until the end of the month. It's a change of strategy. Kim had a preference for a few "try outs" in Scandinavia, Germany and the Netherlands before having to go the full monty (figuratively speaking) before the English pop press, which didn't receive the second album too enthusiastically. First England, then the continent. Popjournals Ludo isn't sleeping. He used to rarely open one eye. 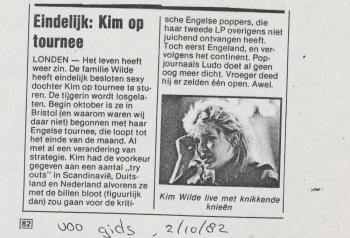