Speculation ran at fever pitch in the foyer of Wolverhampton's ornate Civic Hall. The question everyone dared to ask was about to be answered and as the house lights went down Kim Wilde, star of a thousand bedroom walls, lit up the black country.

For the first date in Britain the cool, inscrutable blonde played her essentially simple pop songs to an audience which went right across the board. The sublime 'Chequered Love' was dutifully rolled out for inspection, but the concert never lapsed into showbiz schmaltz. One or two bumps along the way did nothing to diminish the quality of Miss Wilde's vocal attack. The show effortlessly leapt from the wistful melancholy of 'View From A Bridge' and 'Cambodia', to the sheer pop exuberance of a brilliant 'Water On Glass'.

The boys in the band were too obsessed with resurrecting the ghost of rock 'n' roll and often there was a loud crash where a soft touch would have suited. But minor quibbles aside, Kim Wilde sang a thoroughly respectable selection of songs in a thoroughly professional and entertaining fashion.

This is early in the tour and the strings are tied a little too tight, but by the time the show hits London, Kim Wilde could be really saying something. 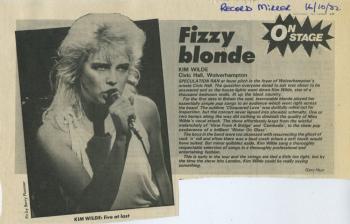