Go Wilde in the city

On the day of the interview, I was nervous and apprehensive (having waited for almost a year to meet Kim) and became so physically sick tht I had to go home to bed for an hour... my stomach was a knot of nerves and my head was spinning with possible questions I could fire at her.
I needn't have worried: that appealing face that has stared down at me recently from the hoarding posters for 'Select' - that funny little snub nose, the sultry pout of those cracked yet sexy lips, the haphazardly dyed hair (modelled on Linda McCartney, she later confides) - breaks into a smile as I first meet her and confess my virtual awe of her.

She's relaxed as hell on the comfy sofa in the RAK offices, her casual-cum-scruffy apparel of black t-shirt and slacks contrasting vividly with the dazzling wall display of gold and silver discs awarded to such artists as Smokie, Mud, Hot Chocolate, Suzi Quatro... and Kim Wilde!

She acts like the perfect professional interviewee, polite and charming, patient but practised, though she claims "interviews are still a novelty for me, I don't do this very often" - which is certainly true, I'd been trying t oarrange this one for months! - "and I'm always interested to see how people react to me and what sort of questions they'll ask.
"And I'm an avid collector of those glossy music mags - I had a day off yesterday and I bought a whole lot to flick through..."

Which can't take you long!
Well you'd be surprised - it does for me. I like to look at the glossy pictures, to see what else is going on in music and fashion.

Are there any other girl artists you see yourself as competing against?
No, not really.

Does that mean you're not competitive?
No - I think I am quite competitive. It's just that I don't see what we're doing as competition.

Do you have a huge ego to fuel what you do?
That's really hard to say - because there's two very conflicting sides to my personality, but they don't actually conflict! There's the side of me that's very laid-back (she pronounces that very American phrase in her oddly soft English accent) not pushy - I've never been pushy anyway - just quiet, private, soulful... all those wonderful things!, she concludes, in an almost self-mocking tone, laughing gently to herself.
And then there's this person who enjoys a real wild time, enjoys absurdities, getting up and doing Top of the Pops, all those things which I love as well!

And if you were to stop tomorrow?
I'd miss it terribly - of course, it's my job!

How long do you see it lasting?
Hopefully as long as I want it to... I'd like to be a sort of elder statesman like Dusty Springfield, except I think sh ecould have done it with a bit more poise. I like people who have style, like Bryan Ferry, he is someone who's managed to maintain that mystique and style, but at the same time he's someone who's not above you, he's still the same guy you saw wearing sequins on Top of the Pops years ago.

Talking of pop history, do you feel as though you're continuing the RAK success story?
No, not really....

But you must be aware of that - it's literally all around you!
Really? Oh God! she exclaims, jumping back in mock-surprise as though it were the first time she'd noticed all those gold and silver discs.
No, this company has had a lot of success with other artists - and I'm very pleased for them - but I don't particularly feel part of anything. The only act here I've ever met is Hot Chocolate.

On the sleeve of the new LP it's noticeable that both the front and back feature just you, and no band - is that symbolic?
Kim laughs, seems to be enjoying the way the interview i heading, then continues.
Symbolic? Yeah, I suppose so - I think it's fairly obvious that with me - as with Toyah - the band is fairly irrelevant. If I wasn't here, there'd be no band, so why not just admit that? It seemed the obvious thing to do!
But there is[!] a band and there [!]will be concerts sometime in the future.

So we keep hearing... but when?
Hopefully we'll get it together to go out around September or October, concentrating on the rock roots level, rather than any grand spectacular.

Has there been a conscious decision to do singles with a more serious approach away from the superficial pop of 'Kids in America'?
Yes, I think so... but when you're in a studio getting a song that sounds special, something that sounds like a single - which doesn't happen often - then you can't ignore that feeling... and also I know that Rick and dad, when they write, are never influenced by what else is going on.

Had they decided that - after establishing Kim Wilde as a pop star - they should make you more human, image-wise?
Well, they definitely didn't want to narrow it down to one kind of music or just one style, as some bands do, and all of us want to keep this thing going far as long as possible. And we realised that by not doing certain things, you widen your chances of success. We'll just keep doing our own thing, because that's how we ot where we are in the first place!
Like someone might say I should follow fashion a bit more or look a bit trendier, but I just don't want to do that, don't want to identify with that... I just wear the clothes that make me feel good and make me feel comfortable - if people get bored cos I'm wearing a black t-shirt again, that's tough, because I feel better in a black t-shirt!

Certainly compared to Toyah, you're quite plain! Do you think that helps the fans identify with you?
Plain? (she chuckles again - no vanity here!) Well people identify with Toyah enormously, but they also identify with me and the difference couldn't be more! That's the great thing about this business, there's room for so many different characters.

When you said earlier 'keep this thing going' - is Kim Wilde this thing, like a creation, or is it just you?
I try not to separate my personality into two different fields. I try to keep the whole thing as Kim Wilde, keep it all as one person and I think I'm succeeding.

But you haven't always been called Kim Wilde, have you?
No - Wilde was my dad's name (Marty Wilde) from his pop star days!

But all of you - yourself, Ricky and your dad - call yourself 'Wilde', is that almost like a joke?
No, it's not a joke to me. It's deadly serious to me. But there was a real whining letter to a paper the other day saying 'Why does Kim Wilde moan about wanting t ostand out as her own identity then she steals her dad's name when her real name is Kim Smith?' and that makes me really angry, because if they knew the answer, they wouldn't ask such stupid questions!

Well, what is the answer?
The answer is... well quite good for me! As I've been growing up - and as I go over all this again, it'll jus tsound as though I'm moaning again! - having a famous dad has had its pain-in-the-arse moments, because people just don't forget, and people wouldn't let me forget and I had plenty of crap thrown at me, got well fed up with it all and even blamed him, which was very unfair...
But previously to starting to make records, I went to art college, and since it was slightly out of our district, I thought I might get away with being Kim Smith, which I did for amost a year - I was just plain Kim Smith and no-one gave a damn - but then I made some friends and they came back to the house and obviously found out ,which was a bit traumatic.
And I thought 'This is so absurd, being ashamed of being Marty Wilde's daughter' - but to hell with it, you are Marty Wilde's daughter, you are Kim Wilde and if you accept that, it makes you a better person...
The longer you run away from something that's staring you in the face, the more unhappy you're going to be, so I thought if I go out (as a performer) a 'Kim Somebody-else', that would be like denouncing him again. He is my dad, and I wanted to come to terms with that for once and for all.

So was it your idea to call yourself Kim Wilde?
Yes it was, and it was a very final decision. I took his name, despite the fact that I thought it would probably go against me - so my reasons for using the name are exactly opposite of what most people think!

Do you think you could have made it without Ricky, without your dad, without the name?
I don't know... YES!

Have you been disappointed that your recent singles haven't done as well as expected?
Sort of - but I'm a fighter! I had it very easy - I got to Number 2 with my first record, and so I was spoilt for success and I think I am spoilt for success. To get to Number 16 and start falling (as 'View from a bridge' did), I must admit it hit me quite hard, but also I'm quite pleased because it made me realise how much I want to do it, how important it is to me and how ambitious I am musically.

Are you tough?
I think I'm fairly resilient - singing to me is a very serious thing - well I take it seriously! I was definitely born to be a performer and yet my career up till now has involved very little performing apart from some live television in France. In a way, that's been frustrating, to know that I could do it, to feel I could bring an audience alive given the chance. I haven't thought for a moment of failure - I don't prepare myself for failure, and when 'View from a bridge' started dropping, it hit me quite badly, it really ruined my day, completely and utterly ruined my day, which was a shame, cos it was a nice day!

Did you sulk?
SULK!!?? That wasn't the word! I was in Japan at the time and I was going to see the tea-room and rock garden at Kyoto... and I don't think I saw any of it, because I felt so totally sorry for myself. Then I thought 'sod it!' and went out and got absolutely drunk out of my skull - and I felt great after that, so it only lasted a day! 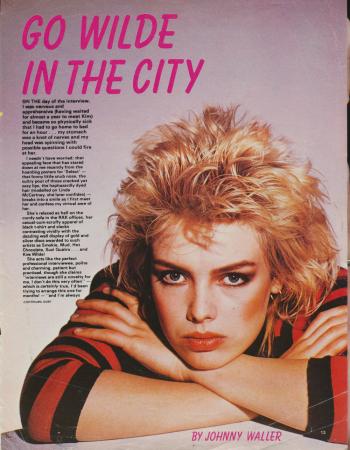 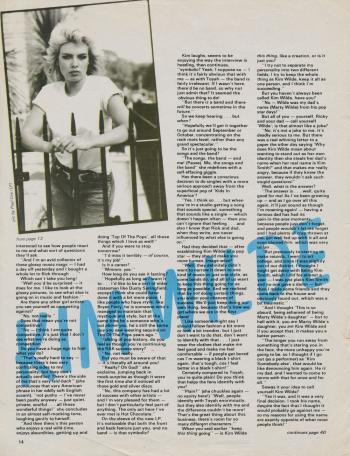 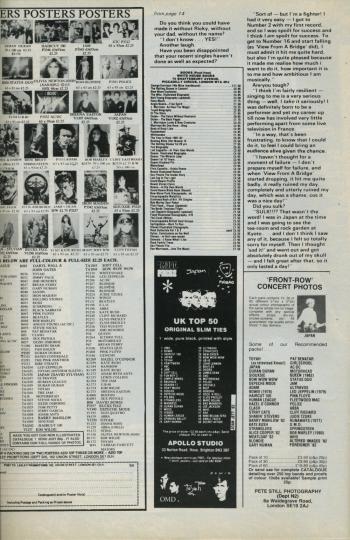