After more than two years the 'mini-special' in the NCRV Radio 3 programme 'Goeiemiddag' ends. The last episode is broadcast on Friday September 24 between noon and 2pm.

Over a hundred national and international acts have been highlighted in the 'mini-special' over the past few years by producer Jaap de Groot and interviewer Frans van der Beek. The farwell of the 'mini-specials' (and also of the programme 'Goeiemiddag' itself) will take place during a special two hour show, in which the English pop singer Kim Wilde will be at the centre of attention. Aside from her, a few artists who were featured in the 'mini-special' during the past two years will be talking.

On the photo: Kim Wilde and Jaap de Groot. 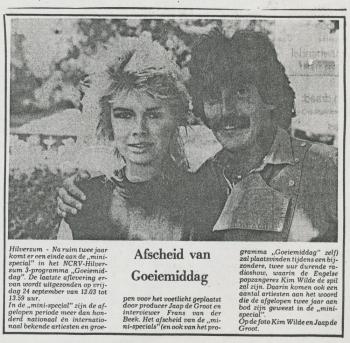