She is described as a sex symbol, but doesn't think she is that attractive herself. And Kim Wilde also has a fear of love. Read what else she talked about during our interview...

Situated in the elegant office of her manager Mickie Most, plastered with gold records, Kim Wilde (21) looks strangely out of place. In her chunky laced-up boots, the jeans and the warehouse jacket from fake leather she looks like some teenager plucked from the streets. The wild manes that were so artily created for her performances are brushed back, the unmade-up face looks sympathetic and sensitive, but not at all as mundane and sexy as it is on photographs. It is clear from the very first look: there are worlds between image and personality. And so comes the first question:

In an English interview you were chosen the no. 1 sex symbol of the pop scene. What do you think of that?
I read it and I laughed very hard. I don't think I'm that sexy at all. I have always been jealous of girls who understand how to gain attention with cut-out shirts, bare shoulders and the like. I'm not like that at all. I always felt like a bumpkin as a teenager because of my broad shoulders and wide hips. Okay, right now I am quite satisfied with the way I look, I have accepted what I am. But I don't think I'm sexy!

People have recently coupled you with Steve Strange. Are you friends?
Steve invited me for dinner one day. When we left the place, there were suddenly photographers there, and the next day in the papers we were suddenly a couple. I haven't seen Steve since...

Do you have a boyfriend right now?
No. It's hard to have any relationship right now. I can see within my family that pressures from outside lead to tension. When there's some words with my parents or my brother, I know it will all be straightened out. But if I were in a relationship, that pressure could potentially be deadly. I have a downright fear to fall in love. I will find the right man when the vortex has passed...

Do you believe in the big love?
Yes, absolutely. I have had two relationships until now, and both lasted for over two years. I have suffered quite badly when these relationships ended.

Is there a "dream type" for you?
If you mean looks by that, then no. It's more about charisma. I think Sting from the Police and Elvis Costello are good examples.

Many girls try to imitate the way you look. What do you think of that?
I think it's a bit stupid really, because you'd never become the one you take the example from. I am often asked in London to which hairdresser I go. I haven't been to one in 18 months. I cut my hair myself with scissors...

What is your biggest wish for the future?
To have my career go in the direction I want it to. In the last year I have been all over the world and I became successful, without having sung live at all. This summer I want to go on tour, and prove myself - and to correct my image! Many people think I'm a pop marionette without substance. I want to end this prejudice, because I'm not afraid about playing live at all! 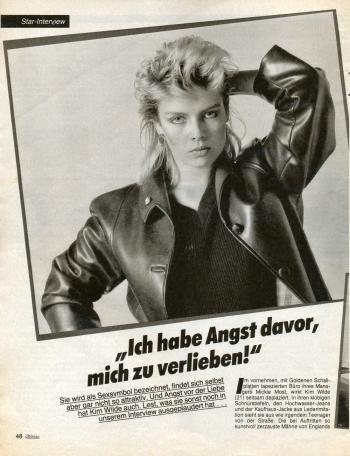