Kim Wilde, 21, rock singer, English, is also a model for a whole generation of adolescents who married her style and, more particularly, her long blonde punk hair whose particularity is to go backwards, from the base of the forehead.

What is the history of this hairstyle?
It's simple. I have always loved the Wings group, of Paul McCartney and his wife Linda. When I was 17, Linda wore a similar hairstyle. I was in college where I was studying artistic studies. I had my hair dyed blonde and I did my hair like her ...

If you ask her if today she doesn't feel trapped in this style and hairstyle, she laughs:
I am mainly a prisoner of peroxide.

For information, peroxide is the fixer that keeps this famous scholarly hairstyle.
I must admit that Kim Wilde's career was absolutely dazzling. His first album, 'Kids of America' was released in January '81, less than two years ago. Since then, two albums whose main titles are 'View from a bridge' and 'Cambodia'. Now, Kim Wilde begins her first tour which she started in Great Britain and which will stop in Brussels, this Monday (at the Cirque Royal) and in Antwerp, the next day (Roma room).

Why did you wait two years before facing the public?
For several reasons. First, it was not possible to tour while preparing my records. However, the first discs count a lot in a career. The success of 'Kids in America' was so sudden that I was offered big promotional tours, all over Great Britain, but also in Australia. And it was while preparing the second album that this tour was planned and planned.
In fact, I am happy that everything went like this because I did not want to rush things, I did not want to spend myself unnecessarily, but to reflect on what I was doing.

What did you learn from contact with the public?
Well, the audience is older than I thought. I expected a younger audience. In fact, there are people of all ages. Otherwise, I am very happy with the reaction. I often have very hot audiences.

There is something! Because, really, Kim Wilde stands out as a 'sex symbol of rock music'. His show is intended as such. It is punctuated by swaying in the Elvis Presley way. But, in addition, Kim Wilde uses his face. She pouted with her mouth, threw violent looks like lightning and ended her singing round with a white T-shirt under which she clearly hinted at a femininity highlighted by the rock movements.
Even his voice sometimes turns into sensual meows.
No, when entering the scene, Kim Wilde is not exceptionally beautiful. But, strangely enough, it becomes so when leaving the stage. An astonishing and wild transfiguration!
In fact, Kim Wilde is mostly a family affair. Her father, Marty, ex-rock singer from the 60s, wrote the lyrics. His brother Ricky is both the composer of Kim's songs and a musician in his orchestra (keyboards and guitar). As for Kim Wilde's mother, Joyce, she plays both the managerial and secretarial roles of a girl she never leaves.
Right now, Kim Wilde is mostly listening to Kid Creole and Japan. But she does not disdain the more traditional music of Frank Sinatra. She plays the organ and the guitar. She loves reading magazines, listening to records and shopping. Particularly in shoe stores.
One of her ambitions: to write songs herself.

"But, at the moment, I really don't have time!"

Those who share her touring life for a few days, say that Kim Wilde is a girl who is both sympathetic and kind, that she is interested in the people who live around her. 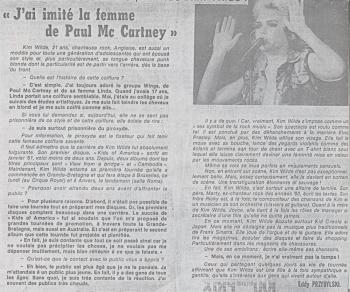