If I knew then what I know now...: Kim Wilde

She used to worry about her height and her size seven feet. Now that she's all grown up, Kim tells Patches about the things she wishes she'd realised earlier in her life...

When I was younger, I really hated being tall. That's not to say that I'm a giant or anything like that - I suppose I'm about 5ft. 5 ins. - but at school I towered above everyone else.

For some silly erason, I became really self-conscious about this, and felt that I had to bend over a bit to get down to their height and make myself less conspicuous!

I suppose that only made things worse, because I looked as if I had a bit of a stoop. I didn't mind that so much - anything  as long as I was the same as aeverybody else.

If I've learned anything about life, it's that everybody likes to be thought of as normal. I used to be like that, too, which is one of the reasons I hated being tall. I hated standing out from the crowd. Now, of course, I realise that way of thinking is stupid. People are different, and they shouldn't be afraid of being themselves. In the line of business I'm in now, I realise that standing out from the crowd is a positive advantage.

Apart from my height, I used to worry about that size of my feet, believe it or not. I had size seven feet (I still do, of course!) and that is a little on the large side. People always used to make jokes about them, which made me even more aware of their size. Of course, the real culprit was myself, because I kept concentrating on thinking about them. I wish I'd realised then that things like that don't matter.

I know that around this time, it suddenly became the fashion to wear platform shoes. If you don't remember them, they were quite large to look at, not easy to wear, and also had a thick base all along them which raised your height by several inches. The idea of being taller than I already was made me feel awful. I really wanted to buy a pair for myself and be in fashion like everyone else, but when I went and tried them on, I realised that there was no way that i could stand being three or four inches taller. Then, of course, I was terrified that everyone would think I was unfashionable. It's difficult to win in a situation like that.

Clothes used to bother me a lot, too. I never felt comfortable in any of the styles that were fashionable. Now, of course, I simply dress to please myself. If only I'd done that when I was younger, I would have been a lot happier, I'm sure. But unfortunately, all I could think about was what other people thought of me, my feet and my height - for a while, they almost took over my life.

The other thing I used to bother about was... boys. I never knew wher eI stood with them. You might think it's a positive advantage to be tall when it comes to going out with boys, because guys are usually taller than girls and often like someone nearer their own height. Not true.

When I was at school, the boys didn't get tall for quite a while, which meant they weren't interested in me a tall. I realise now that my being taller than them simply made them feel insecure and inferior in a way, which is silly - almost as silly as me feeling insecure about having size seven feet! Now I like to think I accept people for what they are. I used to get so frustrated at the idea of having to go out with a boy shorter than myself. It seems funny now, but it was awful then.

And, of course, there were the dances. A boy would see me sitting down and come over for a dance... and I'd uncoil myself to my full height and he wouldn't bother to ask me for a dance again... Fortunately, as I got older, the boys grew taller and things levelled out a bit!

Now, when I look back, I just wish that I'd known how advantageous it is to be a bit taller than some other people. When you've got a bit of height, people don't try to boss you around so much. Unfortunately, I stopped growing around about when I was thirteen, so I'm still about five-feet five, which isn't tall. The silly thing is, I'd like to be taller now!

Of course, I'm mature enough to know now that height isn't important. It's what you are inside that counts, not what's on the surface. I suppose my one big regret is my size-seven feet... 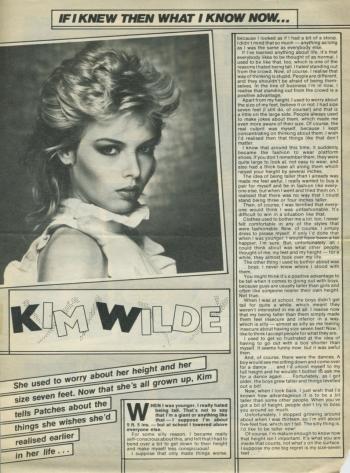