Interview: Kim Wilde or how it is easier to beat around the bush than around the stars

Have you seen Sleeping Beauty? So you have probably noticed somewhere three little fairies fluttering around the beautiful princess to offer their services with the diligence of the Wells Fargo. Kim Wilde is the same. Around her, we see lots of little fairies in jeans-perfecto-cowboy boots, modern fairytale style, plus some charming princes, brass guitar, high chin, clear eye, fixed in the distance on the blue line of the Vosges. Trumpets, whelks, all this little world disembarks from the coach and enters the work castle through a back door, escaping, thanks to the celerity of the fairies, to the cloud of young courtesans who wanted to be granted an initial of the princess. (All they picked up instead was the door in their mouths).

Embarked in the procession, by chance, and after being walked on by almost everyone, I decided to hide away before being asked to pass the mop. Before my eyes takes place the eternal ritual of the preparation of the show: discovery of the lodges, espresso coffees in plastic cups, Tévé interview, broom of the balèzes which light up, sound and machine the future scene of the beautiful Miss.

Leaving the shelter of the broom which served me as a hiding place, I then obtain from an arbitrary chamberlain the audience of a few moments - from which I am always wrong to wait for mountains and wonders - with the star who, like all the stars, no longer need to learn that the interview is twenty minutes of her life a day, to spend with someone she doesn't know, that she has never seen, that she will see again never, that she doesn't want to see, because she's exhausted and she has something else to do. But it does. because it's the job.

It seems that you are very proud of your beauty, that you have a permanent concern for it, and that you hate that you are not found beautiful ...
She drinks her coffee if you want to know everything. Pensive. Beauty ... it makes her come back. "Exactly like all women, she says, all of them care about their beauty, make up ... to please. I am very interested in beauty, but I do not have the feeling of being different from the others . "

Many see you as a sex symbol. How do you feel about the men who admire you? Do you think you can take a place in the imagery of Women such as that of Marilyn Monroe?
Marilyn Monroe? I do not think about it. Around me, at concerts, there are at least as many women as men. It means they come for music, not for my beauty. To be beautiful is impornatnt for the woman but not for the artist. However, sex is everywhere in Rock 'n Roll. So maybe being a sex symbol ... but in the minds of others. Not in mine.

When did you start touring? Is this your first tour in France?
I have barely finished the English tour (16 dates) and I started concerts in France last night in Nice. The atmosphere was not much different. Maybe a little warmer. As this is my first experience, I cannot really judge. A priori, the French are good audiences. Anyway, we don't have enough scene experience to draw conclusions. During the show, we are rather attentive to ourselves, to try to learn faster. That said, I had no problem communicating with the Nice public.

Did the rhythm of the tour surprise you? Isn't it too hard physically?
I am tired. I knew it was hard but still it surprises. When you go on stage, you take like a big slap that gets in shape for two hours. After, it's something else. We live in permanent fatigue.

Who are the musicians accompanying you on stage?
They weren't the ones who played on the albums. The group is completely new ... Except my brother Ricky on guitar.

The princess travels with the family, with arms and luggage, probably to avoid an excessive change of scenery. On stage, Frangin Ricky takes care of everything, in the company of the musicos. She gets impatient a little ... English style ... without really showing it. So I resume.

Does the fact that you are promoted by your record company, the tours, the media and the public, pose a problem in your relations with the other members of the group? Don't they feel a little frustrated?
Absolutely not. It is true that at the beginning the public comes to see me, me, and not my guitarist or my drummer. But if they weren't there, if they weren't as good instrumentalists, able to present the show they are performing, people wouldn't come a second time. Therefore, the audience appreciates them at least as much as I do during the show and they realize it. So there is no problem. We get along very well and have never known any 'friction' inside the group. Besides, we intend to stay together and the training will be this for the next album. Our ambition is to be a rock band and not a figure, in order to be able to make music above all.

Do you think that the world of rock opens up to women as easily as it does to men, or that there is still a lot to do for women to gain access to the music professions?
I think it is always more difficult today for women to become 'Rock Star'. The rock world is still quite closed. But more than in music, where a girl can always impose her talent, I deplore the male grip on the professions of the studio and the production. It is an area where female talent has no leisure to try. I would like to come later to production, both for personal taste and to open a way.

A voice like yours is extremely worked in the studio. Do you have trouble getting it to work on stage?
No.

She must be seated on a pea the Princess. Certainly it upsets her pretty ass because there, she no longer wants to last.

How did you get started in music? Did you study to become a rock star, or did it come by chance?
Ask my brother. On the scene there, he wears the hat.

Indeed, Frangin Ricky wears the hat and also the pants. It was he who already composed the music at the time when they were only poor models sent hopelessly to record companies. And then one day it was 'Kids In America', the contract, the record, the success, the glory, which is the variant to 'They lived happily and had many children' when we have to deal with brothers and sister rather than lovers.

We have enough titles to ensure a scene, we hire the musicians for the tour and then we start, still young, still green, but already voluntary. The large empty room during rehearsal and balance, is full of the silence that precedes thunderstorms. The Princess is impatient to wait for the hour of her coronation.

Can you allow me a little remark? Me, as far as someone is interested, I liked the Perrault version better, than the current romance or the happy end can be summed up in two words: Cash drawer and projectors. Little Kim, she is cute, even if there is nothing to fuck the tail in trumpet, and then, she is nice, and then, she succeeded.

But it stays in the family.

- Allex, don't piss off, give me back my binoculars, you've looked at it enough, you've already had two fly buttons, it's my turn now!

Eh yes! when there are around 2300 people standing on the armchairs to wish the same thing as you, to eat Kim by all the eyes and incidentally by the ears, the chances are slim to be able to plant his teeth in the scene, just under the baby tender alabaster face, fresh porcelain guaranteed 22 springs, which poses small gourmet lips on its steel kim-cone by shaking its golden mane of wise punkette. From the first pieces, the lighters were lit, the arms were stretched, the cries, the sighs, the rales transformed the Lyon Stock Exchange into the Temple of Delirium. What Pat Benatar had missed in the same place because of a play of scene far too static, what a Deborah Harry could perhaps have achieved, Kim Wilde succeeded without problem: triumph over his first passage.

No jury needed to know who was elected "Miss Rock 82". Behind the scenes, dad, mom and the brother had to rub their hands. Ah, the brave little one! When one has given birth to such a miniature, it is better still to see it jiggle lasciviously on a stage than to spread out lazily in a magazine. Although one does not prevent the other, but I do not yet know of any light rock face that has felt the need.

Twenty years ago, the words 'star', 'vamp', 'pin-up' were so many labels reserved for the only princesses from the thigh of the 7th art whose plastic merits were more readily compared on a Hollywood beach. or on the Cannes Croisette as the ability to make the camera cry. But today is the crisis; the paparazzi point to unemployment, the myths are not renewed; young actresses worthy of the name refuse to play B.B., Sophia and Co; Ursula Andress, Raquel Welch and other Farah Fawcett have not found Marilyn's secret; so it is not surprising to see that glamor has taken refuge in music and that after an offensive in variety, the little girls of Monroe have invaded the rock scene.

The big O.P.A. charm is launched and the kids fall like flies, mired in mascara and leather jeans, fascinated by the beautiful butterflies that flutter under the sunlights. And these ladies are then surprised to be reduced to a sex symbol which they embody in turn.

The orchestra ensures a maximum, the sound is perfect, our radiant starlet, bombarded with clic-clacs by the first rows who came clad with their reproduction devices, Cambodia attack. It's the cyclone. The end is near. With 'Kids in America', it's the hurricane. The only ones who remain indifferent to the scene: the service pickpockets which quietly traffic between the room and the convises.

Give me your binoculars, just one last time ... Damn, she's gone! 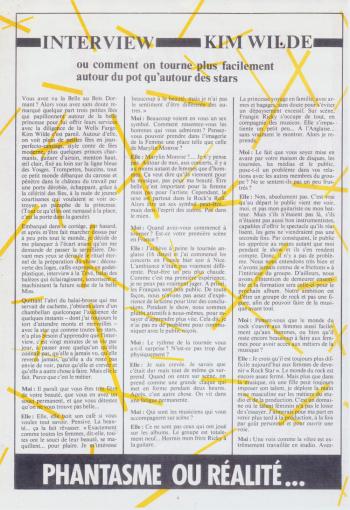 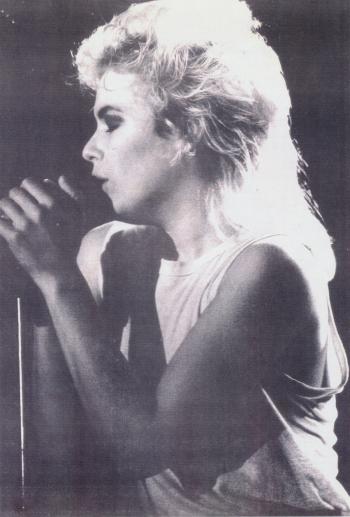 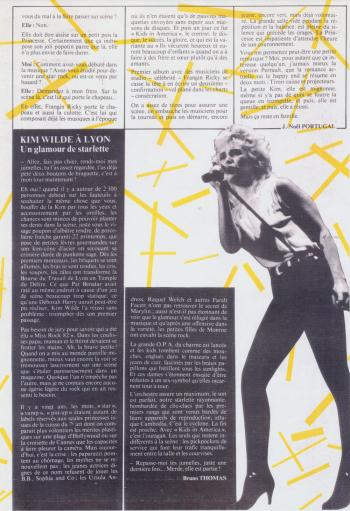