Kim Wilde was wearing the torn white vest she appropriated from a friend years ago, green cotton trousers and brown suede shoes she bought in an Oxfam shop for $7.

Three years ago, she went to a hairdresser with a picture of Linda McCartney and said: 'I want to look like this.' Today she cuts and dyes her hair herself, buys most of her clothes from Oxfam or second-hand market stlls and at the age of 21, looks a bit like a rather hard up, punk cindy doll.

In truth, of course, she is rapidly becoming very, very rich but is determined not to show it. She's bought a shabby old 1920s flat and a modest car, because she couldn't bear anybody to think she'd "got flash". She combines working-class, hard-working thrift and dislike for anything "showy", with middle-class gloss, which is scarcely surprising because their background encompasses both. Her father is singer Marty Wilde, her mother was Joyce Baker of the singing Vernon Girls, her paternal grand-dad was a bus driver and her mother's father was a Liverpool Corporation building foreman.

She grew up in middle-class affluence in the Hertfordshire countryside. Since her first record, Kids In America, became a mammoth hit nearly two years ago, she's been eulogised for her animal magnetism, her resemblance to a young Bardot and her magnolia-like skin. She has a grown-up brother Ricky, a three-year-old sister called Roxanne, a baby brother Marty and, despite the new flat, still goes home every night to Hertfordshire.

"The house is half-filled with antiques and half with new stuff because my dad has a craving for anything modern", she says. "You couldn't say it was thought out, it's just a very lived-in place, with the kids' toys everywhere.

'I'm not scared of a bit of work. I used to help mom with the housework. I worked in the greenhouse down the road as a Saturday job, my friend and I used to clean at the hospital. I cleaned my piano teacher's house for a while - that was my first job.

Convinced in her heart that she wanted to be a solo singer, Kim kept it to herself, knowing that her father wanted her to get a good education. At school she was known by the real family name of Smith and sang Verdi's Requiem in the choir. When she was 13 she sang with her father on stage for the first time in Lewisham, and later during her school holidays she toured the country with him.

After A-levels she went to art college and spent her summer holidays looking after Roxanne and singing on some tracks her brother Ricky was preparing. She said: 'I thought I just might get my nose in.' When Ricky Most heard her rendering of Kids In America, he said: 'That's a hit record, I'm going to produce it.'

Today Kim is surrounded by all the paraphernalia of the pop world: the flunkies, the slightly nutty fans, the claustrophobia and the ever-increasing danger of alienation from reality and true friends. 'The only thing that frightens me is losing the reason why I came into business in the first place', she says. 'There are so many distractions - in success, in money - but as long as I don't lose sight of the fact that I'm here only beause I want to sing, because I love performing, I'll be all right. My friends are still the people I've known for years. A lot of them are still at college. One of them is a grocer, some work in shops. We go on holiday together or to pubs, and I hope it won't change. I'll always have time for them if they'll have time for me.' 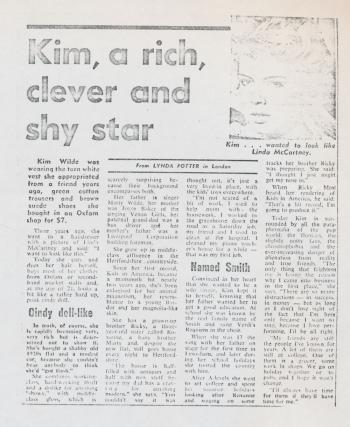