Only once Kim Wilde showed her feminine side to the television audience. But the miniskirt and high heels are already over. In this Bravo Interview she says why...

On the brown leather couch in Mickie Most's executive room Kim Wilde sits down in black jeans and a black T-shirt. She wears black schoes with Stiletto heels, tied high up to her ankles. Her hair is longer, more untamed than ever. The only nod towards femininity are black gloves...

How did your new song "View from a bridge" come to be? What is the lyric about? Are there any parallels between you and the girl on the bridge, who's reflecting on her life?
Kim: The song was, like all the others, written by my father and brother Ricky. It's mainly about someone who is looking at her own reflection in the water and who is coming to terms with herself. Indirectly it could be me, in this song.

How is a hit written in the Wilde household?
Either my father has an idea, or it's my brother. They then get together and fiddle about. Only when the song is somewhat ready, I get involved. We always talk about the lyrics beforehand. I have to be involved with that because I will have to sing the song with conviction.

Who decides your image?
Of course I often discuss things with Daddy and Ricky, but my image is totally my responsibility. I must feel well in the clothing I wear privately and on stage. I've always preferred tight trousers, because I'm not too impressed with my own legs. I've always loved colours such as black, white, grey and most of all blue. And my preference for second-hand clothing originates from the time when I studied art. At that time I did not get a scholarship; I did not want to beg for money with my parents. I worked as a barmaid in the evenings, in order to be able to buy some little things. Of course I did eat and sleep at home.

Why then your transfer to more female clothing, thus dresses, mini skirts, sharp high heels and gloves?
I felt myself sometime on the bell. Everyone else, including my mother, wanted to see me dress more female. I was only wearing strictly, almost military, male clothes. I noticed the gloves first when Clare Crogan of Altered Images wore them. Mini skirts are uncomfortable. I feel observed and uncertain in them. In the future I want to lose them again. The Wilde family advice (father Marty, Ricky, mother Joyce and Kim) decided unanimously that I am to return again to trousers and stricter clothes.

What cosmetics do you use?
Actually the same, which I used as a student: brown eyeshadow, black eyelashing and lip gloss. More than 40 Marks converted in the month I won't spend on it.

What do you do with your money?
I only really started making money this year. Before I couldn't afford much, as a student with a side job. At the beginning of this year I bought my dream car, a black and white BMW Cabriolet, with which I hope to do a large European drive sometime. Additionally I invested into an apartment at Regents park.

For the autumn you plan your first live gig. What can the fans expect?
It's going to be captivating and interesting. The show is to be so that it does not make the fans feel that they have wasted their money. Above all it will have first-class sound with good light effects.

You became slim, did you do a hunger diet?
I want to be topfit for my stage shows. Therefore I jog daily at least two hours and cycle a lot. Additionally I hardly eat any meat, but a lot of vegetables, fruit and salads. I already lost ten pounds.

About your private life: we heard that you go out with Steve strand, that you have a soft spot for Adam Ant and were recently seen with Simon Le Bon from Duran Duran. What is true about the rumours that there is a new man in your life?
I would not like to express myself on this subject. A steady boyfriend I cannot afford, because I would have no time for him at this time. I find Adam, Steve and Simon very nice. There is nothing more to it than that... 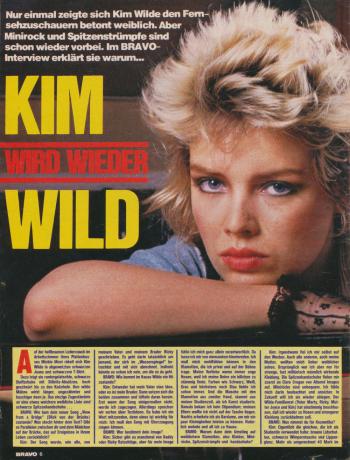 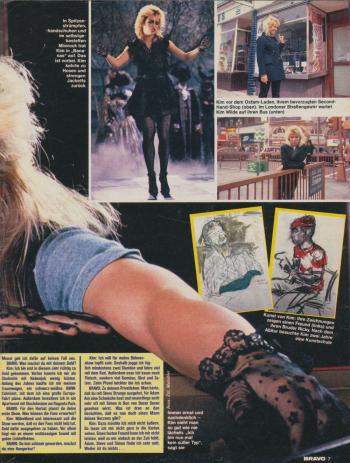