In Denmark and England Kim took over the fans by storm - the next station is Germany!

Black, tight trousers, t-shirt, jeans jacket, black leather jacket and black boots - that's how Kim Wilde appears on stage, takes her place in front of the microphone and starts with 'Chequered love'. It's Kim's very first live performance on this Monday night in Copenhagen's 'Falkonerteatret'. The 2000 fans experience an allround perfect and exciting super show - Kim Wilde exceeds all the high expectations fully. She is backed by an excellent band - her brother Ricky plays synths and guitar - and two background singers support her during the 64 minute set and three encores. Kim's voice fascinates throughout, she sings exactly as strong as on record. During 'Water on glass', the second song, Kim takes off her jacket and starts to dance. She moves well, passionate and very sexy. Her strong personality reaches out to the last rows in the hall. It also works during a slow track like 'Everything we know' - the hysterical fans sudddenly become quiet, stare at Kim, who takes the mike stand in her hands, as if it were her partner. Then follow 'Take me tonight', 'Falling out' and 'Just a feeling', some rockier songs. Kim has such a strong voice that she can put some force into it without it losing its clarity. The fans lap it all up, talk and dance. There's a loud cheer when 'View from a bridge' starts. 'Cambodia' in theatrical red light, then 'Kids in America', the new 'Child come away' and at the end, 'Chequered love' once more. Kim shakes hands, blows a few kisses into the audience - a triumph. Until October 27 Kim Wilde performed live in England 19 times. Whether she comes to us is not sure yet. 'It could be November, or February '83!' 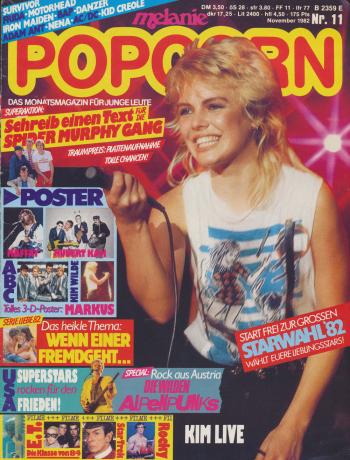 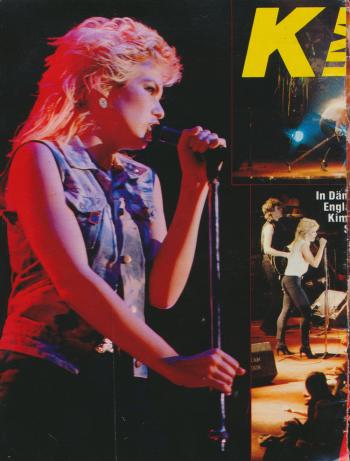 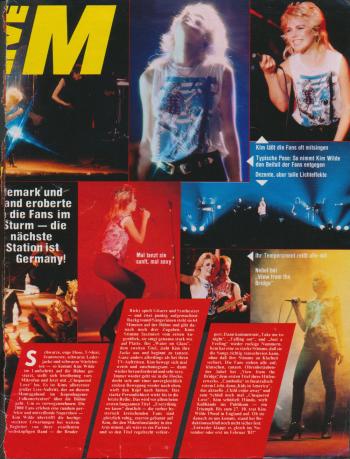