Kim, dubbed the Bardot of pop because of her sultry looks and simmering sexuality, is one of the nicest, most level headed people you could meet. She bops around in a pair of old jeans, drinks coffee out of a battered old plastic beaker and is perfectly happy to be seen without wearing any make-up. She has a very rare charismatic quality - but is not aware of it. "I read about myself, but I can never really believe that it's me", she said. 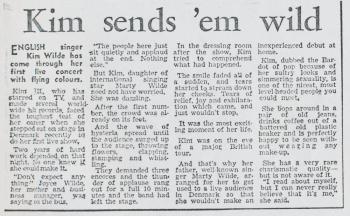