At the age of 21 and record sales of over six million by now, Kim Wilde is on the way to an international breakthrough. Looking at her family background, one can see that her father Marty Wilde was one of the original rock 'n' rollers of the Fifties alongside Cliff Richard and Billy Fury, who stormed the charts with hits like "Endless Love", "Rubber Ball" and songs like "Teenager in Love". Today he concentrates primarily on writing Kim's lyrics.

Kim: "I grew up with music, my father was a successful musician and singer, my mother also comes from a showbiz-background, and my brother Ricky plays guitar, keyboards and sings".

Kim's brother Ricky had made four records while he was just eleven years old and was very active as a songwriter since the autumn of 1980. One of his demo tapes, featuring the song "Kids in America", sung by Kim, was presented to Mickie Most, a producer of stars like Hot Chocolate, Donovan, The Animals and others.

Most: "I believed that Kids in America could be a hit, and when I saw Kim for the first time, I knew that she would be successful. Her voice was promising and her appearance was very independent and impressive. I thought most teenagers could identify with her." Mickie Most wasn't wrong, "Kids in America" sold over two million copies, and from that hit came some TV appearances. From then on, things went upwards: Kim's second single "Chequered Love" sold just as good, and after she recorded her third single, "Water on Glass", Mickie Most felt it was time for her first album. Eight new songs were recorded at the RAK studios in London, this debut album sold a million times. A year ago Kim was very surprised by her big success.

Kim: "I can hardly believe, that everything is happening", she said at the time. "I hoped for success, but I never dreamed that everything would happen so fast." For each of Kim's singles, videos were made, copies of which were sent to the States and 60 other countries.

Mickie Most: "Video is an extremely effective medium to present artists like Kim. She's also very photogenetic." Kim still lives with her parents right now, but is planning to buy a home in London.

Kim: "At home there was never much discussion about the fact that I wanted to be a singer. My mother supported me during my teenage years, while my father tried to focus my attention on other things. My school years was mostly lots of fun, I wasn't the top of my class, but was good at sports, languages, drama and arts. During my year at art college I learned a lot, but had to decide one day to either study more or to turn towards music, and when I saw that I had more records than art books, I knew that music was the thing for me. I had a basic schooling that could be built upon. Thanks to my father I learned a lot, especially when I was a backing singer. It was very impressive for me, how he always had a good show, whether it was a big or a small one."

Kim is convinced, that there is no generation gap between her and her father, whether it's musical or otherwise. Kim: "We usually like the same sounds, when we hear the radio for instance. His musical assessment is sometimes different from mine, understandably, because I'm younger."

According to Kim there were only two circumstances for differences of opinion. Kim: "The first time was when I started going out a lot at 17, and the second was when I decided to dye my hair blonde. Unfortunately the first time I did this my hair turned bright blonde, and this caused heated debate with my parents. I saw my misstep, tried it with the correct colouring, and since then my hair has become a kind of trademark."

Despite her success Kim can still move around freely, recently during a skiing holiday in Spain she was hardly recognised. Kim: "When people noticed I looked like Kim Wilde, I was already gone."

Kim's audience mostly consists of people between 12 and 18 years old, and lots of girls identify with her looks.

Kim's producer Mickie Most says that over a million pounds in studio recordings, music videos and promotion trips to Australia, America, South Africa and Europe were already invested. Right now Kim is fully busy with the preparations for her first live tour in England, rehearsing with her and. Her first big concerts in London take place on October 26 and 27. Tickets for these concerts can be won in this issue's competition. We hope to see Kim in German concert halls in the near future too. 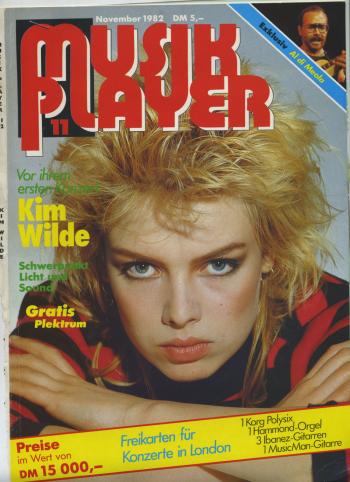 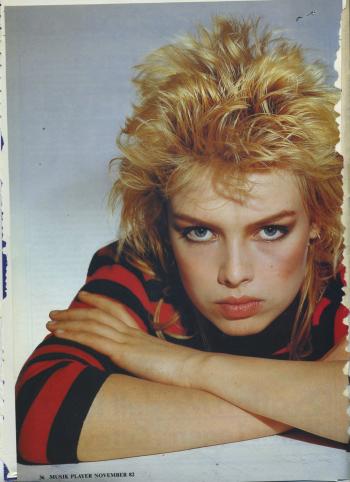 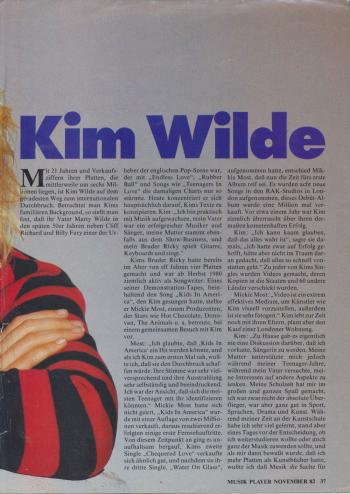 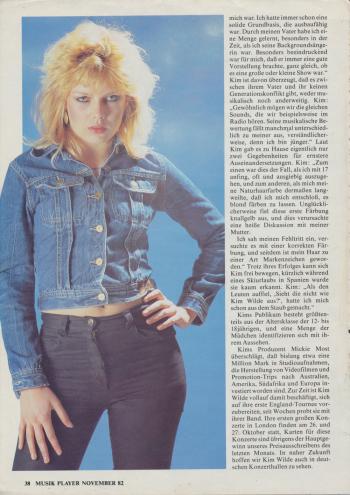